As the current chairman of the board of Towson University Hillel, Matthew Lipsky understands the role the organization can play in the life of a young Jewish college student.

“It’s almost like a friend away from home, that they can be part of or take advantage of while not near mom and dad or their synagogue,” said Lipsky, a resident of Mt. Washington and a member of Chizuk Amuno Congregation.

Born and raised in New York and educated in the Reform tradition, Lipsky moved to Maryland in 1992 to attend Towson State University, where he received a degree in business administration.

Lipsky has been in real estate for 25 years, working in finance and eventually rising to chief operating officer for a commercial and residential real estate brokerage. Recently, though, he’s begun working on opening a physical therapy and balance center, hoping to help patients dealing with vertigo or trouble walking.

As there was no Hillel presence at Towson when Lipsky was a student there, he first became involved in the organization in 2015, when he was invited to join its board by some of its senior leadership, he said.

“When I heard about what Towson Hillel was doing for its students, I was more than excited to support them,” Lipsky said.

There are approximately 2,000 Jewish students at Towson University, Lipsky estimated. The Hillel serves nearly half of them. Its mission is to support these Jewish students while they are away from home, with programs and services that include Shabbat services, kosher dining, Birthright trips and general support, such as lending an ear if a student feels homesick.

As a board member, Lipsky’s responsibilities included fundraising, marketing and coming up with new ideas for student programming, he said.

Lipsky was nominated to be board chair by the Hillel’s executive board, and he took on the role in May after a vote by the full board. He expects much of his focus during his two-year term to be on expanding the Hillel’s facilities and available space.

“The good news is that we are growing,” Lipsky said. “But we are outgrowing the space that Towson University has graciously provided for us, and because of that, we now have to look off campus for a solution because the university has no more space to offer us.”

With support from The Associated: Jewish Federation of Baltimore, Lipsky has been heavily involved in finding and leasing an off-campus space in Towson, which will provide students with an additional place to engage in Hillel programming. In time, he expects the new space will include a kosher kitchen, meeting rooms and an open area.

Another goal of Lipsky’s is to communicate to more of Towson’s Jewish student population that they are welcome at Hillel.

“I also want to expand who we serve,” Lipsky said. “I want to put the word out that we serve all Jewish students, no matter their denomination or involvement within the community. I just want the students to know that they have a place to go to where they can look at things through a Jewish lens and perhaps explore their Judaism.” 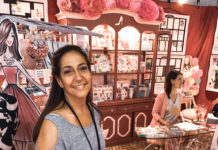