It was during a family Seder many years ago that theatrical director, producer and playwright Eric Rosen’s free-spirited Jewish father chose to break the news of his secret marriage to Rosen’s Southern Baptist mother. One can only imagine what Elijah must have observed when he visited the Rosen home that night. But whatever the prophet may have seen or heard, the unlikely union produced Rosen, the 43-year-old artistic director of the Kansas City (Mo.) Repertory Theatre and director of “Vanya and Sonia and Masha and Spike,” the Tony Award-winning comedy by Christopher Durang that opened to rave reviews at Center Stage on April 25.

Although Rosen’s mother underwent an Orthodox conversion, after his parents divorced, she drifted back toward her family’s faith. He and his brother grew up in New York and North Carolina and spent time with relatives from both religious traditions. The result, he said, was a feeling of not quite fitting into either world. “I don’t think my father’s family really accepted me and my brother as Jews until we had our bar mitzvahs,” said Rosen.

“It made me ask questions about culture and identity, and I don’t know if I would have been asking those questions if I had grown up in a more homogenous environment,” said Rosen. It also created in Rosen a fascination about Jewish history and the diaspora as well as the Yiddish theater. Rosen believes it was partly his upbringing and the feeling of being “the other” that gave him the “keen sense of observation” that has made him so successful in his work.

“I think a lot of my artistic life is based on the sense of justice and ethics my [Jewish] grandparents taught me,” he explained. “When I came out [as a gay man] I felt I had to do something to move the culture ahead. So in 1995, I started About Face Theatre in Chicago, one of the largest and most successful lesbian and gay theater companies in the country.”

Rosen left About Face in 2008 to take his current position at the Kansas City Rep. Since becoming artistic director there, Rosen has directed “Clay,” “Winesburg, Ohio,” “A Christmas Story, The Musical!,” “Venice,” a musical he co-wrote with Matt Sax, “Cabaret,” “August: Osage County,” “The Whipping Man,” “Death of A Salesman,” and “Romeo and Juliet.” His other writings include “Dream Boy,” “Wedding Play,” “Dancer from the Dance,” “Whitman” and “Undone.” Despite his prolific work in Kansas City and in addition to directing “Vanya” in Baltimore, Rosen has still found time to direct world premieres of “M. Proust” by Mary Zimmerman, “Theater District” and “Take Me Out.”

Currently, Rosen is anxiously awaiting the release of the album from his hit musical, “Venice.”

“Vanya and Sonia and Masha and Spike” tells the story of Vanya (Bruce Randolph Nelson) and his adopted sister, Sonia (Barbara Walsh), who live together in the comfortable family home where they grew up. Having spent “the best years of their lives” caring for their aging parents, they are filled with bitterness and regret about what they might have done with themselves. When their movie-star sister, Masha (Susan Rome) shows up at the house with her hot young actor boyfriend (Zachary Andrews), hilarity ensues, as each of the siblings struggle with their own inner demons and their relationships with one another. Based on the plays of Anton Chekhov, and named for his characters, Durang’s script is chock full of allusions to the Russian playwright’s classic works.

When Rosen saw “Vanya” on Broadway, he knew right away that he wanted to bring the show to Kansas City. “It had everything wonderful about Durang married to everything wonderful about Chekhov. I don’t do a lot of picking up last season’s plays but this was an exception for me. And ours couldn’t be more different than the Broadway production,” he said. “The original was so ‘starry.’ It had Sigourney Weaver playing Masha and David Hyde Pierce from “Frasier” playing Vanya, stars everyone knew and we couldn’t repeat it. I needed to have real pros that people wouldn’t necessarily know.”

Some of those “pros” were Nelson, who is actually quite well known to Baltimore audiences, and Rome, who is known for both acting, directing, as the former director of performing arts at the Baltimore Lab School and as an artist-in-residence for the JCC’s Maccabi Artsfest.

Though it may come as a surprise to some readers and audiences, Nelson said that Chekhov meant works such as “The Cherry Orchard,” “The Seagull,” “Uncle Vanya” and “The Three Sisters,” all of which center on the desolate lives of their angst-ridden characters, to be comedies. In contrast, Durang’s “Vanya” is an unmistakable laugh riot. And while those in the know will find the script’s references to Chekhov especially amusing, Nelson believes the family dynamics portrayed in “Vanya” will be relatable for all audiences.

Neither Nelson, nor Susan Rome, who plays Masha, the movie star in the show, saw Durang’s play prior to being cast. Both went about preparing for the role in their own ways. Nelson said he tends to be more of an “outside in actor” whereas most actors start by figuring out a character’s inner workings prior to his voice and physical traits. “So I’m going to figure out how the character walks and what his hair looks like. There’s a lot of shrinking and slowing down in playing Vanya. I gravitate to wild mayhem, so it’s a challenge to play a character like this.”

Rome, who studied Chekhov extensively in college, said she immersed herself in Chekhov, reading a book of his letters to his wife, actress Olga Knipper. “He was fervent, and he wrote about acting and love. They [the letters] so matched with the plays,” said Rome. “I’ve always thought Chekhov was funny, in the way life is funny, the ironies, the extremes …” Playing the role of Masha has been fun for Rome. “Being that huge in an entrance. That’s so not who I am. She’s obnoxious but there’s this vulnerability under the surface. I want people to love hating her.”

Rosen said he is thrilled with the cast he has put together for the Baltimore production. Some of the show’s characters, Spike (Zachary Andrews,) Nina (Emily Peterson) and Sonia (Barbara Walsh) are played by the same actors who starred in the Kansas City production. “I love anything Center Stage does, and I am a huge fan of Kwame [Kwei-Armah, artistic director of Center Stage]. It’s been a great, joyful experience — like a two-month love fest!”

“Vanya and Sonia and Masha and Spike” runs through May 25. 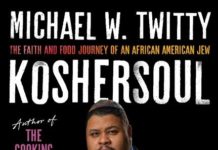