Security. This was the only message that Prime Minister Binyamin Netanyahu delivered to a crowd of more than 2,000 people on Sunday, Nov. 10 at the opening plenary of the Jewish Federations of North America’s General Assembly.

“The most important thing is to assure the security and the future of the Jewish state, the one and only Jewish state of Israel,” said Netanyahu as he launched into a more than 30-minute speech.

The PM started with Iran. He told the audience of Jewish communal professionals and lay leaders that an Iran without nuclear weapons is essential not only for Israel, but for the entire world – the U.S., Europe, the Arabs, the Chinese and the Russians.

“But for us,” said Netanyahu, “it is a matter of our existence.”

Netanyahu lashed out at the P5+1 (the five permanent members of the UN Security Council, namely United States, Russia, China, United Kingdom, and France, plus Germany) for agreeing to lighten sanctions on Iran when it came to the table pleading, ready to negotiate because the sanctions are having impact. He said the P5+1 placed demands on Iran to cease and desist the building of capabilities to produce atomic bombs that have brought Iran to its knees, why now would we want to come to a deal without Iran dismantling anything.

“Why Iran has come for a deal is obvious. It is because the sanctions are biting, are crippling that regime. They came to the table because they have to,” he said, expressing exasperation that the group would agree to lghten sanctions when “not one centrifuge is dismantled – not one.”

He said Iran can in a matter of a few weeks take the capabilities it has and produce a nuclear weapon.

“Iran does not roll back its nuclear making capacity at all, but P5+1 are rolling back sanctions? That is a bad deal, it is a dangerous deal. … That affects our survival,” said Netanyahu. “I will not be silenced – never. … When the Jewish people were silenced on matters relating to our survival you know what happened.”

Then he told the audience that Iran was not only targeting his country, but most certainly the U.S., too.

“Who is Iran targeting when it builds the ICBMs (Intercontinental Ballistic Missiles)? They already have rockets and missiles to reach us. They need those [ICBMs] to reach North America. And they can be nuclear tipped. That is the plan –  coming to a theater near you. Do you want that? Well, do something about it,” he charged.

He said Israel is in charge of defending itself and that is what it will do.

And not only when it comes to Iran.

The PM next turned to the Palestinian-Israeli peace process and said, again, that first and foremost was the safety, security and longevity of the Jewish state.

He told the crowd that if the Palestinians expect Israel to recognize a Palestinian state, they must recognize a Jewish state for the Jewish people. He said, “That is what peace is about.”

Netanyahu walked attendees through Israel’s painful and bloody past, through the 1921 attack on the Jewish immigration office in Jaffa, through the horrible beheading of babies in 1929 with the Hebron massacre and on through the systematic attacks by the Arabs on the Jewish community between 1936 and 1939. During World War II, he reminded, it was Haj Amin al-Husseini who partnered with Adolf Hitler and called for a final solution. He then said that in 1947 the Jews accepted a two-state solution while the Arabs refused and when the Jews established their state, they were attacked on all fronts, attacks which lasted until the 1967 war.

“For 46 years there were systemic attacks on the very nature of the Jewish state. Not on settlements,” he said. “There were not any settlement. …. Not about a Palestinian state, they rejected it. … It was about the Jewish state. They have to recognize the Jewish state. … What is their struggle for? Palestine. What is Palestine? It is Kiryat Shemona to Eilat, it is from the river to the sea.”

And so, bringing the talk back to the issue of security, Netanyahu then said that even if the Palestinians agreed to recognize Israel, “there is no durable peace that is not based on security. … A peace agreement that is not based on absolutely robust security for Israel by Israel will not stand test of time. We need a peace based on security. That is the other fundamental piece. We need security to defend the peace — and security to defend Israel in case peace unravels. And in our region, peace has a tendency to unravel.”

Next, and also connected to Israel’s peace and security, Netanyahu spoke about shalom bayit between Israel and Diaspora Jews. He claimed it his responsibility as PM of Israel to keep the peace of the Jewish people. And he said it was he who asked Natan Sharansky to head a Kotel task force and that he is confident we are on the cusp of making a final solution come to fruition.

He cited an announcement made earlier this week at the Jewish Agency for Israel conference about new plans (see “Exclusive Briefing: JAFI’s Misha Galperin On New Program To Ignite Stronger Diaspora-Israeli Connection>>“) to further connect young Diaspora Jews with Israel and noted that he has agreed to invest Israeli money in the endeavor.

“We are committed to it,” said Netanyahu. “We know the challenge of Jewish unity. There are the forces of assimilation and intermarriage [in the States]. … We have sponsored this initiative to work together, to think through [these things] together, and to put forward programs to solidify … a Jewish identity that is so central to our future.”

Read what’s happening with the group traveling from Washington, D.C.>> 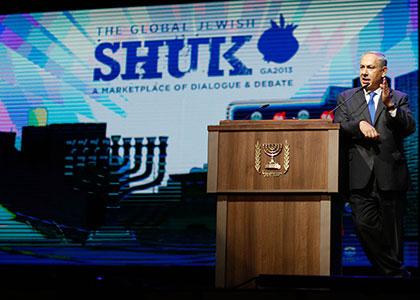 Peres Calls For Peace, For Courage