Netivot Shalom has started a new virtual book discussion series for community members to be engaged while keeping safe from COVID-19 and staying warm during the winter.

“It is a very open space discussion to talk about books pertaining to relevant and important issues in contemporary American life, both religious and secular,” said Jonathan Arking of Pikesville, a Netivot Shalom member and student at Princeton University.

The series began at the suggestion of Dr. Howard Lederman, a board member and former president. Staff at Netivot Shalom were looking for ideas for new programs, and the series was one of many ideas that emerged from the drawing board, Lederman said.

The participants are a “pretty eclectic group” and include a writer, an accountant, a biologist and more than one physician, Lederman said. 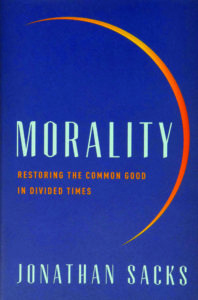 The series had its first discussion Jan. 6, led by Arking. Arking got involved after his father, a Netivot Shalom board member, suggested he do so. The initial meeting included about 15 to 20 participants, Arking said, and was focused on the book “Morality: Restoring the Common Good in Divided Times” by Rabbi Jonathan Sacks.

The book was chosen in part due to the recent passing of its author. Sacks was someone who “in the larger Jewish community had been incredibly influential, with his thought, with his videos, with his social media contacts, with his books. We wanted to do something to honor his memory, to do some learning of his own work,” Arking said.

Feeling the content of the book was very relevant to contemporary American and Western life, Arking said, he expressed that it had been a good discussion on truth vs. untruth, on how to create a marketplace of ideas and what speech can potentially lead to regarding harm and violence.

The fact that the event was taking place on the same day as the storming of the U.S. Capitol made the discussion feel all the more relevant, Arking explained. “They showed in even more stark terms the stakes that are at play,” he said, “and what happens when we have people who literally don’t believe the results of an election, or we have people who think that we need a revolution, who are calling for violent uprisings.

“And that’s language that’s a breakdown of trust in institutions and in the people around us,” Arking continued. “And that definitely was underlining I think the entire discussion that we had of how we try to move past that.”

A second book event, currently scheduled for March 7, will cover “The Great Influenza: The Story of the Deadliest Pandemic in History” by John Barry. The event will be led by Lederman, who, as a microbiologist and a specialist in immunodeficiency, has a special interest in the subject matter, he said. During the discussion, Lederman hopes to demonstrate the parallels between the 1918 Spanish Flu and the current pandemic.

“It has to do with the way that this started and the way that it kind of insidiously spread, the panic that ensued,” Lederman said. He also noted how the earlier pandemic also had issues of coordination between federal and local responses, and how some people were “in a panic mode, some people in a denial mode, many people somewhere in between.”

That being said, Lederman hoped attendees would leave with a sense of “how fortunate we are to be living in the 21st century, and not at the beginning of the 20th century. That a hundred years has made a remarkable difference in terms of the science and our ability to handle something like the current pandemic.”

All members of the community are welcome to participate, Arking said. Netivot Shalom membership is not required.

Setting an example in Baltimore and beyond with Marty Taylor

TV legend Norman Lear turns 100, with a song and an Instagram