About a year ago, it was determined that the playground structures that serve Chizuk Amuno Congregation and its surrounding schools were rotting and beyond repair, and it was time for an overhaul. The obvious next step was to purchase new equipment and have it installed — as was­ declared during a Chizuk Amuno executive board meeting, which member Stephen Pomerantz attended.

“Almost involuntarily I said, ‘We can’t do that, we have to do it ourselves,’” Pomerantz recalled, laughing. 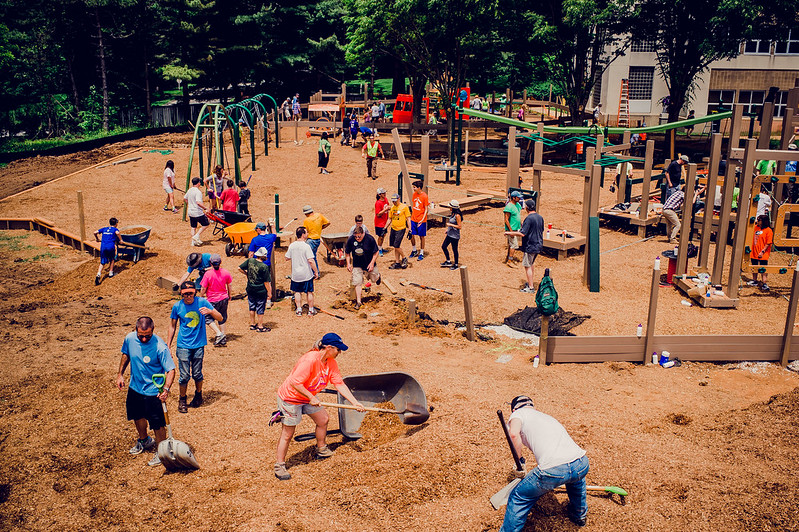 He swiftly convinced leadership at the synagogue and its associated educational facilities — the Rosenbloom Religious School, the Goldsmith Early Childhood Education Center and the Krieger Schechter Day School — that a “community build” was the way to proceed.

“Then they said, ‘Guess what? You’re in charge.’” More laughing.

But Pomerantz had participated in a similar build of the biblical playground at the JCC, and he also helped build a playground in Baltimore’s sister city, Ashkelon, Israel, so he understood the power generated by such a communal effort.

“It’s a shared experience,” he said. “[Participants] feel ownership. They look at that piece of bridge and think, ‘I attached that. I’m connected to it forever.’”

This was, however, the first time Pomerantz would be in charge. And a project of this size — 30 physical structures across 12,000 square feet, a 4,000-square-foot amphitheater and fundraising for more than $520,000 — involves myriad moving parts, such as the design elements, supplies procurement, coordination of deliveries by 18-wheel trucks and the storage associated with that, not to mention a small army of volunteers to help carry out every stage of the project from concept to completion.

This was not a “get a kit from IKEA and put it together” kind of deal, Pomerantz said. “So the first thing I needed was Liz [Minkin-Friedman]. I needed somebody on the inside to be dedicated to this project, and the only way it will be successful is it needs to be Liz. She’s at the center of all of this.”

“Two hundred fifty people in rainy, cold weather showed up. They never complained; they were so committed. It felt like a magical Woodstock moment — you know, ‘where were you when …?’ We were up to our hips in mud, and I was so inspired by the community action.”

If you’ve ever been in the presence of Minkin-Friedman, director of community outreach and engagement at Krieger Schechter Day School, you know what Pomerantz means. She’s like a small, effervescent tornado, and anything in her path will get enthusiastically assessed, addressed and completed, all with a sense of humor and a smile.

“It fell under my wheelhouse, this is meant to be a community-wide project,” said Minkin-Friedman. “It’s been a herculean project, but it’s paying off in dividends even before it’s finished. We can feel the excitement and the magic and the ownership [from the community]. It’s been a labor of love.”

And labor she has, being the central touchpoint for 10 captains and as many teams that include public relations, materials and tools acquisition, fund-raising and events, volunteer recruitment, design, building days coordination and even a team that created a “camp” where parents could drop off their kids on construction days while they worked and the children would stay entertained and safe. Children and adults gave input on the designs, and more than 400 people showed up for the big reveal of the final plans last fall.

Then earlier this month, after almost a year of planning and prep, a week of heavy precipitation preceded a driving, daylong rain that further deluged the grounds during the first big community build weekend. There was concern about a possible shortage of volunteers needed to get the job done and stay on schedule. But the organizers, including co-chair Adam Baumwald, were completely blown away by the turnout.

“Sure enough, people came out and they came in droves” even though “it was a total mud fest.” he said, and included all ages. “There was a 75-year-old retired physician working [alongside] an 18-year-old kid trying to go to college, working in the mud and the rain and doing it with a smile. You heard laughing and talking. It’s a real testament to the community when they come out in this weather.”

Minkin-Friedman said, for those who participated, it was an experience they’ll never forget.

“Two-hundred fifty people in rainy, cold weather showed up. They never complained; they were so committed. It felt like a magical Woodstock moment — you know, ‘where were you when …?’” she said, laughing. “We were up to our hips in mud, and I was so inspired by the community action.”

The playground construction company that specializes in supervising community builds, Leathers and Associates, facilitated their efforts, and “there was a concern we’d be fake building,” Minkin-Friedman said. But, in fact, it was “true building, and they gave us meaningful tasks. We are building it with our own hands.”

Pomerantz said he was in awe of the talent and creativity that came out of the woodwork. Community members who are professionals or serious hobbyists in landscaping, construction, design and more showed up. There were grandparents using power tools, parents and children navigating wheelbarrows, digging, drilling, hammering — it ran the gamut.

Building continued during the week, and the big push was Sunday and Monday of Memorial Day weekend with expectations to break the 1,000 mark of volunteers, who, of course, must be fed during their labors, which required yet another staff of volunteers to carry out.

All of the structures are made of safe recycled materials, Pomerantz said, and the signage and details reflect Jewish values. There is the Derech Eretz express train and fire engine number 613, and more than 20 quotes that reflect Jewish values are placed throughout so teachers can use them as instructional tools. The Ben and Esther Rosenbloom Amphitheater can be used as an outdoor classroom, prayer space and for performances and even weddings. There is also a musical instrument station in each play area, one for babies and children to age 5 and the other for ages 5 to 99, he said.

The ribbon cutting and opening happens Sunday, June 5 to coincide with the 5th Annual Schechter on the Move 5K Race and 1-Mile Fun Run, which, according to Schechter’s director of development, Alison Wielechowski, raised more than $50,000 for scholarships from upward of 100 sponsors, surpassing all previous years. Though also a community effort, she praised this year’s race chairs, Stacey Getz and Jamie Cohen, for their leadership.

The race begins at 8 a.m. and the ribbon cutting is at 10 a.m. to allow for racers to have breakfast, listen to provided DJ music and receive medals.

“It’s such a wonderful way for the entire community to get together for the annual event and the brand new community project as well,” Wielechowski said.

Major funders for the playground are Leon and Phyllis Wagner Brill, the Goldsmith Family and Ben and Esther Rosenbloom. Hundreds of individual donations made up the bulk of the funds, however, and Baumwald cited The Associated: Jewish Community Federation of Baltimore’s powerhouse development duo, Allison Baumwald and Leslie Pomerantz, spouses of the co-chairs, as “paramount for advice on fundraising and ‘silently’ helping out with great ideas.”

Pomerantz also chalks up the success as a testament to the fact that it has been a community effort through and through.

“We challenged our community to do something that would be out of the normal experience and to do something together. This huge diverse community — between schools and shul — people stepped up from all over. They brought their energy, resources, creativity and ideas. I don’t think people knew that was out there, and it all poured forth.”

Holocaust survivors struggle to get the vaccine