Approximately 250 people from Baltimore’s Jewish community traveled by bus, car and subway train to protest the appeal trial of then 24-year-old Wayne Stephen Young, who was convicted of killing 11-year-old Esther Lebovitz in 1969.

A student of the Bais Yaakov School for Girls, she was last seen in Pikesville after being dropped off at the end of a school day at a local drugstore. Her body was found three days later in a ditch not far from her Mount Washington home.

The courtroom, almost stiflingly hot, was beyond capacity Thursday, with spectators filling the benches, aisles and perimeter. The lawyers in attendance were even permitted to fill the 13 juror chairs to make more room.  On the buses and in the courtroom, many people silently read from prayer books. Lebovitz’s immediate family, who moved to Israel shortly after the incident, was not in attendance.

Young, who has been denied parole 12 times, requested appeal of his conviction based on a recent ruling by Maryland’s appellate court. Known as the Unger ruling, it cites incorrect jury instructions administered in Maryland courtrooms that may have led to unfair trials. More than a dozen Maryland prisoners convicted before 1980, when the jury instructions were amended, have had their convictions retried and have been released. The state reviews these appeals on a case-by-case basis.

Now 68, gray and balding, Young was dressed in Department of Corrections issue blue shirt and pants and sat silently next to defense attorney Erika J. Suter. He seemed relaxed and appeared to be following the two lawyers’ testimony. Suter gave the opening statement requesting to reopen the conviction for a retrial based on the Unger ruling.

“It is not in the interest of justice to reopen this trial,” began assistant state prosecuting attorney Antonio Gioia, who spoke for more than 20 minutes. He read from transcripts detailing the heinous crime, including autopsy results of Lebovitz being beaten with a blunt instrument at least 17 times and sexual molestation.

Gioia also read a statement made by the officer who administered a polygraph test to Young, who had pled temporary insanity at the time of his original trial.

“I did this,” the officer testified that Young told him. “I killed that little girl.”

Frank Storch, 56, was 12 when Lebovitz was murdered. Storch, whose father was president of Bais Yaakov at the time, said of the murder that he “remembers it like it was yesterday.” He organized transportation to leave from the Seven Mile Market so that community members could show their support in the courtroom.

“In silence our community gathered,” Storch said after the hearing, “and spoke millions of words.”

Neil Schachter has been president of the Northwest Citizen’s Patrol since 2000. He explained that when someone comes up for parole he is typically notified far in advance. Because Young’s appeal was not parole-based this time, Schachter heard about the hearing only days before from Abba Poliakoff, a cousin of the Lebovitz family. His organization got the word out via Facebook, websites and letters to community rabbis.

“[Poliakoff] got a phone call last week,” related Schachter. “He called me and said we need to do something. … We didn’t have much time to put this together to garner this support.”

Schachter was thankful and impressed with the number of people who came out.

Rabbi Yaakov Menken was one of the throngs of people who took time off in the afternoon to attend.

“It’s important to stand as a community when something so horrible has happened that affects the entire community,” he said.

Debbie Lowenstein, from Pikesville, patiently waited in a long line outside the courthouse as each person was shuttled through security.

“I’m here because as soon as I heard that story [as a young girl] it affected me greatly … because it was so close to home,” she explained. “And any Jewish girl is like a sister – it’s like family and you think how could this happen and they cannot let this man go.”

Baltimore Circuit Judge Edward R.K. Hardagon did not make an immediate decision. He explained that he must review records and would issue a written statement at a later date, but acknowledged the enormous show of protest by the community when he spoke to the courtroom.

“It does not go unnoticed how many people are here,” he said. “Thank you for coming.”

Outside the courthouse after the hearing, Dr. Bert Miller of Park Heights, a retired teacher from Bais Yaakov, said Lebovitz would have eventually been in his 11th grade class if she hadn’t been killed. He added that it wasn’t just Lebovitz that was murdered that day, but her future children and even grandchildren.

“We have a saying,” he said, “one who takes one life, kills the whole world.”

All In The Family 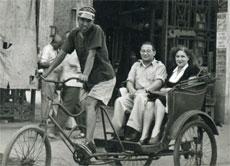 Jewish Orgs. on Alert After Fatal Shootings in Kansas City