It’s that magical time of year when high school seniors celebrate the end of one journey and the beginning of another. The Baltimore Jewish Times is proud to feature five of Jewish Baltimore’s best — young adults who have distinguished themselves within their school and community and who no doubt will achieve much more as they bring hope to the future of Jewish Baltimore.

We congratulate all of Jewish Baltimore’s graduates and wish them much success! Andrew Dardick
Owings Mills High School
Andrew Dardick has experienced firsthand what it means to make a positive impact on a young person’s life by volunteering for both the Special Olympics of Maryland and The Friendship Circle, a Jewish organization for children with special needs. His work with both is what has inspired him to become a nurse when he begins college this fall at the University of Maryland.

“It’s important to me to go into a field in which I can make a difference in the community,” said Dardick, 18, who graduated on May 28.

Dardick ingrained himself in many aspects of school and Jewish life over the past four years. He was a member of the Owings Mills wrestling and tennis teams and will work as a tennis instructor at McDonogh this summer.

As a senior, he was president of the school’s Jewish Student Union. He was also a member of NCSY and participated in the Ben Cardin Jewish Scholars Program, where he joined more than 70 other Jewish students from the Baltimore-Washington area to lobby lawmakers on Capitol Hill on a variety of issues, including support for Israel and tougher sanctions against Iran.

“[NCSY and the Jewish Student Union] are great ways to promote Jewish values among young people,” Dardick said. “I’ve had the opportunity to meet Jewish students from all over the area and from all types of backgrounds, which provided me an invaluable experience as I prepare to go to college.”

Dardick said he chose Maryland in part because of its large and active Jewish community. He hopes to follow a family tradition and be active on campus, especially with Hillel.

“It hasn’t sunk in yet that I’ve graduated from high school,” Dardick said. “At the same time, I’m excited about what the next chapter in my life will bring.” Graduation will be bittersweet for Avital Luny.

Although she was excited and proud to receive her diploma on June 11, The Shoshana S. Cardin School graduate knows her class was the last for the day school, which has announced plans to close.

“I’m glad we got to finish what we started, but it’s sad for the underclassmen and the fact that we [graduates] won’t have anything to come back to,” said Luny, 18, of Baltimore.

Even though her school is closing, Luny said the lessons she takes away after four years will stay with her for a lifetime. Along with receiving what she described as a strong Jewish education, Luny was president of the National Honor Society and a member of the basketball and cross-country teams.

“Cardin provided many great opportunities because of its small size and the chance for so much one-on-one interaction,” Luny said. “But the biggest opportunity was meeting friends from all across the Jewish spectrum. That experience really opened my eyes to the pluralism among the Jewish community. I grew up Modern Orthodox but consider myself ‘Conservadox’ now because of the chance to learn how others practice our faith.”

Outside the classroom, Luny participated in several Jewish youth programs, including NCSY and Project ROPE (Roots of Philanthropy Education), which taught her how to raise money for charity and how to directly help those in need.

Luny is undecided about her college major but is leaning toward business, which she will try to use in helping the environment. She plans on attending Brandeis University in Massachusetts in the fall.

“I’m really sad about saying goodbye, especially knowing the school is closing,” Luny said. “But it’s time to move forward and use the lessons I learned at Cardin to help me at college and beyond.” Sarah Miller
Pikesville High School
Sarah Miller grew increasingly frustrated with how prevalent bullying had become among her peers. So she decided to do something about it.

Miller, 18, 2012-2013 president of her school’s Jewish Student Union, joined with leaders of three area Jewish youth groups to sign a pledge to end bullying in the community.

Along with the signing itself, they collaborated to create a two-minute video that features the teen leaders taking turns reading different segments of the pledge, promising to be there for the 10,000 Jewish teens in schools throughout Baltimore.

“Unfortunately, you see bully-ing all over the place, and I think it’s gotten even worse over the last few years. I just wanted to do something about it,” said Miller, who received her diploma on May 29. “The hope was to bring attention to this issue within the Jewish community and to bring youth together to make those being bullied know that they are not alone and to remind those who are bullies that what they are doing is wrong.”

For Miller, it was important that she got involved in as many Jewish causes as possible during high school to ensure her faith remained strong.

“Pikesville High is known for its large Jewish student population, but that doesn’t mean they are all connected,” said Miller, who was also on the girls lacrosse and tennis teams.

“Being a part of the Jewish Student Union helped me feel whole and was a great experience.”

Miller hopes to instill the lessons she learned, especially as they pertain to bullying, onto future students, as she plans to major in early childhood education when she attends the University of Alabama in the fall.

Miller “just fell in love” with the campus when she visited the school last year.

“I felt like I would fit in just fine,” Miller said. “They have a small Jewish community, but that includes a Hillel, and I’m excited about expanding my horizons.” Rachel Orlinsky
Roland Park Country School
Rachel Orlinsky admits it was not always easy to be proud — or even open — about being Jewish.

Orlinsky, 18, said there are few Jewish students at her school, which led her to feel disconnected from the Jewish community during much of her youth.

That changed a few years ago when Orlinsky became a Diller
Baltimore Teen Fellow. The fellowship is a 14-month teen leadership
program of the Jewish Volunteer Connection, a program of The
Associated: Jewish Community Federation of Baltimore, that focuses on four pillars: leadership, Israel, Judaism and community service.

Orlinsky said the fellowship altered the course of her life and provided her a greater appreciation for being Jewish and understanding her faith.

Through the program, Orlinsky, a talented dancer, used her skill to teach dance to special-needs students at the Rosenbloom Owings Mills JCC. She also hosted a student from Ashkelon, Israel and visited the Jewish state.

“I just didn’t have a lot of exposure to Jewish life at RPCS,” said Orlinsky, who was also on the golf team. “That’s all changed thanks to the fellowship experience. I’ve really connected with Judaism and picked up leadership skills that will benefit me later in life. The people I met through JVC and the fellowship are now my best friends. We get together all the time and invite each other over for Shabbat dinner.”

Orlinsky will attend the University of Pennsylvania in the fall. She plans to be a pre-med major, although she hopes to also find time to continue to dance. She added that she picked Penn because of the school’s strong Jewish student base.

“Being at a school where there is a strong Jewish influence is important to me,” she said. “I’m excited about what the future holds.” Ranen, 18, participated in the Students Taking Action for Change program, a collaborative effort of the Jewish Volunteer Connection and the Baltimore Jewish Council, both programs of The Associated: Jewish Community Federation of Baltimore. STAC is a nine-month program for high school sophomores and juniors that focuses on social justice and advocacy and teaches teens to be agents of change.

During that experience, Ranen, who graduated from The Bryn Mawr School on June 11, said she learned about lobbying and the political process, met with local and state leaders, gained leadership experience and built relationships with a diverse group of peers.

“I really learned what it takes to be a leader during that experience with STAC,” Ranen said. “We learned how as a community to bring about change in the political process and through a grass-roots effort.”

Ranen said the leadership skills she gained were invaluable in April when she chaired the JVC’s second annual Teen Leadership Summit at Baltimore Hebrew Congregation. The goal was to foster an environment for students to network and learn how to become community leaders. She said it was a challenge to lead the effort but considered it a success, as 120 teens from across the Baltimore area learned how to utilize social networks to advance a cause and how to promote social justice.

“It was a tough experience, but I learned a lot through that process. It was great to see such a huge turnout,” Ranen said. “We definitely made an impact.”

Along with those projects, Ranen said she has always sought out rewarding causes in the community. This includes spending the last three years volunteering as an assistant aquatics coach for the Special Olympics of Maryland. She spent almost every Sunday working with up to 30 people ages 10 to 70 with a variety of special needs.
Ranen will attend the University of Pennsylvania in the fall.

“It feels great when you can make an impact on someone’s life,” she said. 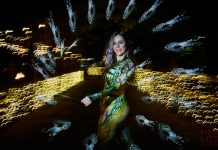