It’s not uncommon to feel a little intimidated or anxious when starting a brand-new job right after moving to a brand-new town. But Sarah Jacobs, Chizuk Amuno’s director of development and engagement, had to do all this in the midst of the initial coronavirus shutdowns in March, at a time when the new normal hadn’t sunk in yet and when everything seemed to turn on its head.

“Definitely there [were] hard moments coming out, making new friends, getting used to a new city, having to buy a car for the first time in 10-plus years,” Jacobs said. “There are so many social experiences individuals have when it’s a non-COVID time.”

At the same time, while COVID has certainly created some professional hurdles, she noted that social distancing has streamlined certain professional activities.

“I was probably able to meet so many more of our board members within the first month of me working at Chizuk Amuno,” Jacobs said, “because of COVID and being able to schedule Zoom calls with them.”

Jacobs come to the role with experience working for nonprofits. After receiving her bachelor’s degree from Purdue University and her master’s from Bernard M. Baruch College, Jacobs spent much of her time working in the nonprofit field, she said. This included working as a city director for the Indianapolis BBYO, as a religious school and b’nai mitzvah coordinator at Congregation Beth Elohim in New York and as a senior manager for volunteer engagement at the National Multiple Sclerosis Society in Chicago. While she loved the four years she spent at the National Multiple Sclerosis Society, she eventually felt an urge to return to working within the Jewish community.

The way in which Jacobs came into her current position was a bit on the circuitous side. Originally, she was interviewing for a position at the Rosenbloom Owings Mills JCC. The interviewer was not certain she’d be a good fit for that particular position but decided to send Jacobs’ resume out to a few others in the community. It found its way onto the desk of Rabbi Joshua Gruenberg, senior rabbi at Chizuk Amuno. When the synagogue expressed an interest in having her come aboard their team, Jacobs was very excited, in part because her parents had previously been members of the shul. “Seeing the name, I said, ‘Oh my gosh! I’ve been there! I know them! This is super exciting!’”

In addition to her previous exposure to the synagogue, Jacobs noted that her older brother lives in Springfield, Va. As such, her move to the area from Chicago allowed her to be closer to her family. Additionally, Chizuk Amuno reminded her of Park Synagogue, the Cleveland congregation she had grown up in. “It’s a large, Conservative synagogue with a lot of rich history when it comes to their congregants, and multiple generations,” Jacobs said.

Jacobs described her responsibilities as being “all-encompassing.”

“It’s a really exciting time right now, being able to work with the congregation, as well as the schools, on fundraising and membership engagement right now,” she said.

The majority of her position involves fundraising for Chizuk Amuno and its affiliated entities, including Krieger Schechter Day School, Goldsmith Early Childhood Center and Rosenbloom Religious School. This is done through grant opportunities, annual campaigns and general giving by congregants. Despite the pandemic, fundraising is going well, she said, and is currently trending ahead of where it had been last year. Jacobs also mentioned that they are keeping an eye on the congregation’s 150th anniversary next year.

Jacobs’ day-to-day work involves processing donations, keeping track of who has given what in the current year, monitoring the overall increase or decrease of donations each year and connecting with members and answering their questions.

“She’s been doing a terrific job under certainly unusual circumstances,” said Lee Sherman, executive director at Chizuk Amuno. “I think anyone who started a job in March, when we were all working remotely, is a challenge. And Sarah’s been great at becoming part of the team and assuming, as we all have over the past six months, responsibilities and duties that we didn’t anticipate because of how much the work has changed.”

Jacobs was glad for the opportunity to be “doing something different every day,” and to connect with lay leaders and congregants new and old. She also expressed her gratitude to be working professionally within the Jewish world.

“I grew up in the Conservative movement,” Jacobs said, “but also being very proud of my religion and my culture, and I feel as though being able to work in synagogue administration, I’m able to give back and pay forward the experiences I had, and been able to really show how wonderful it is to be part of a community.” 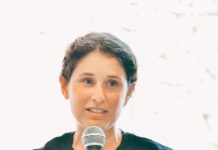 Season of Service kicks off 5782 with commitment to volunteering