Jessica Barthlow Goldberg felt a loneliness pulling her spirits down during her high-risk pregnancy a few months ago. The 34-year-old Mt. Washington resident, usually a lighthearted and bubbly person, was unable to see her friends and family. One day, she called up a buddy of several decades, Leah Kowalsky, and they came up with an idea to cheer up the entire community. Barthlow Goldberg suggested they create a kosher version of the Facebook group Sisterhood of the Travelling Spirits for their own community: Sisterhood of the Traveling Schnapps. 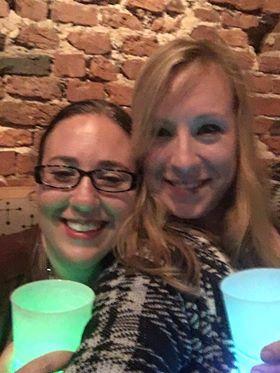 On the Facebook page, members can post if they are feeling down and could use a pick-me-up. Then, other members can drop off random gifts, such as toiletries or flowers, to their Baltimore address. The founders said deliveries are made daily, amounting to hundreds already.

The two started the page right after Purim, initially for single mothers to connect and share random gifts of food, alcohol or supplies. Their friend, Shira Baskin, joined the team to moderate and do some behind-the-scenes magic. They then opened it up to health care workers. 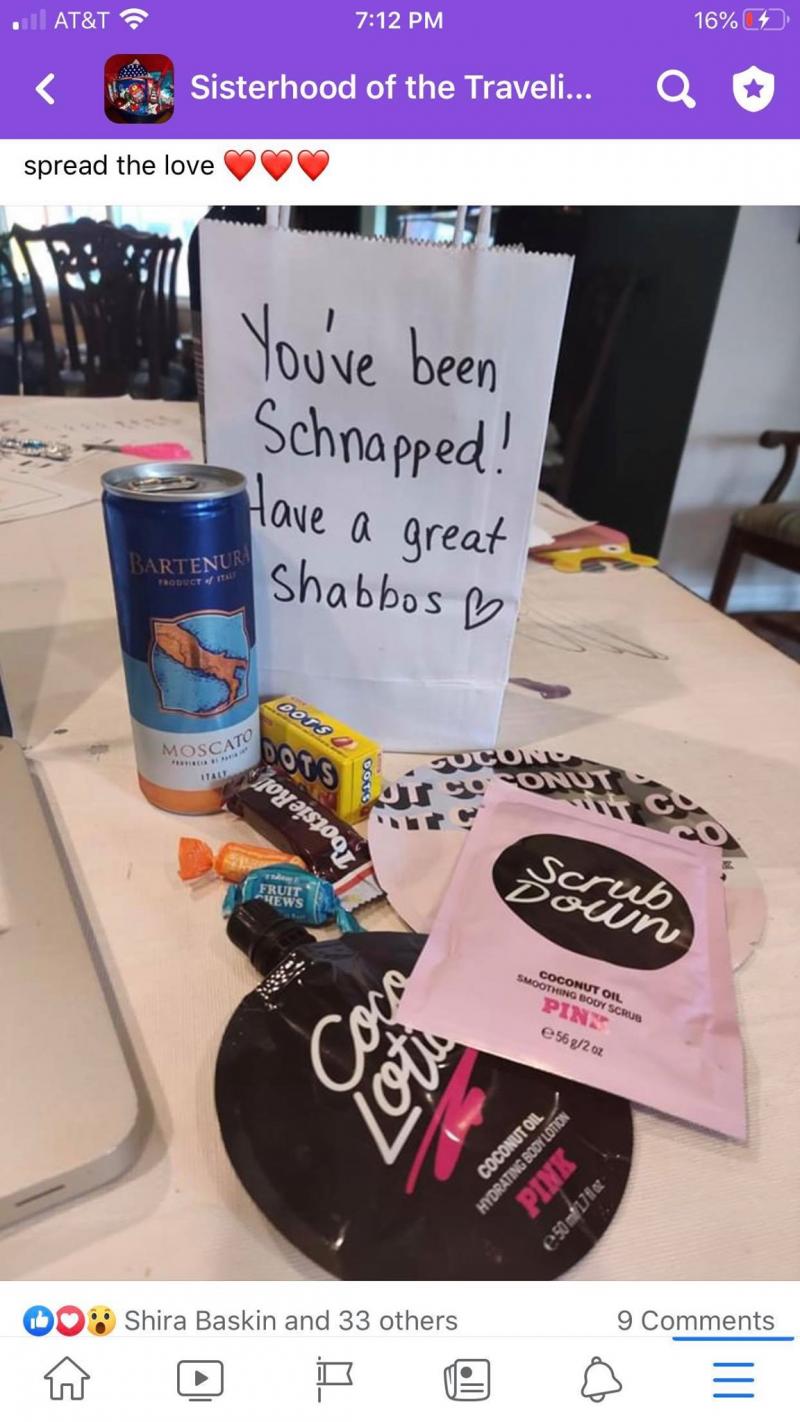 “That was meaningful to me, being taken care of [by] so many nurses and doctors all day,” said Barthlow Goldberg, who is also a teacher at Beth Tfiloh teacher.

The Sisterhood of the Traveling Schnapps now has 753 members who are encouraged to purchase items from local businesses, such as gift cards for closed salons, to support the economy.

The group is open to all denominations and ethnicities, but items (known as Schnapps bags) are kosher in order to be inclusive. Some gift ideas include an iced coffee and muffin for breakfast, or face masks. Alcohol can also be a gift, so members must be over 21. Barthlow Goldberg also asks that members remember to label allergens and to knock on the door of recipients.

The loving way the community has come together in acts of kindness reflects its Jewish values.

“As a mom, chessed is one of the most important foundations of our religion and what I want to instill in my children,” Barthlow Goldberg said.

She loves being able to see the effects of this kindness. “One of the greatest things is sometimes people will post how positively it affects them,” she said. “It is so rewarding to just hear how it affected them. And the timing is always perfect. Like, maybe they just lost their job, or a family member is sick.” She knows of another woman whose baby was born prematurely like her own. “The husband came home and found [the Schnapps bag.] They were having the worst day of their life and, to think, somebody was so thoughtful. Each story is meaningful. During my own pregnancy once, I hadn’t eaten all day and then [food] just showed up at my door. It made me feel so loved and cared for.”

Especially during COVID-19, “just that sense of the Jewish community caring for each other through the darkness is incredible,” co-founder Kowalsky, 36, of Pikesville, said. She continued that while these moments are enhanced by the struggles of the pandemic, it is a timeless way for the community to connect. “In life in general, so many people experience isolation and the feeling of loss. Just to be able to connect to those people and say, ‘I don’t know you but I got your back, I know what it’s like.’ To really just say, I don’t need to be your best friend, but I care,’” Kowalsky said. “It gives them a sense of direction in this time that they felt so lost.”

One member, Fallon Saposnik, 36, of Pikesville, didn’t realize how much the Facebook group would be a lifesaver during the pandemic.

“Someone invited me to the group, and for a while I didn’t understand. You know, I join lots of Facebook groups,” she said. “But then I started noticing the posts and thought this looks nice, getting gifts from people you don’t even know, like lotion and goodies to cheer people up. You know, what nice thing to be a part of.”

For the past three months, she has been making about two deliveries a week. Usually she bakes goods to clear out the freezer, but other times she’ll send Goldberg’s bagels, a salad or a care package.

Saposnik has also received goods in return. Sometimes she comes home from a delivery and finds lotion, nut mixes or a tiny bottle of vodka on her doorstep.

“I like the randomness of it,” she said. “I don’t do it to get. I love giving. I feel like the past six months have been very difficult for everyone. Whether you are alone or have a family, it’s difficult. And this feels like you’re not alone, we all have these same problems and are on the same boat.”

The group connects her to friends who she rarely if ever sees anymore, and even helps her connect to those she didn’t know well in the first place.