Jill and Ernie Slovon and Lori and Larry Adler joyfully announce the marriage of their children, Stephanie and Jeffrey Adler, on Oct. 24, 2015. Rabbi Dana Saroken officiated the ceremony, which was followed by a reception at the Marriott Waterfront in Baltimore.

The couple enjoyed their honeymoon in Costa Rica, and they reside in Brooklyn, N.Y. 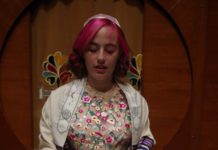