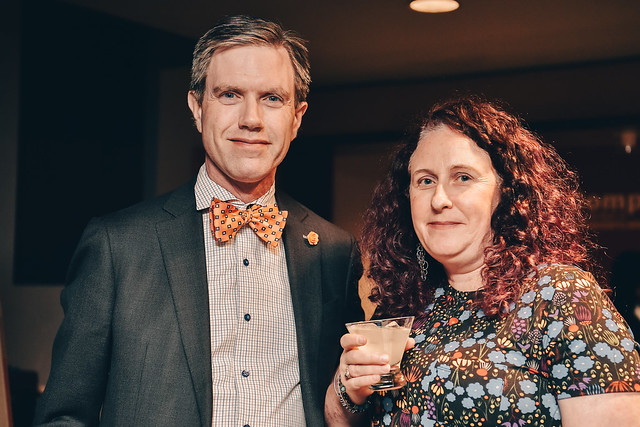 It was a festive night at the Chesapeake Shakespeare Company Theater in downtown Baltimore on May 22, as members from the Greater Baltimore cultural institutions that participated in “Baltimore’s Spring of Remembrance,” gathered for an hors d’oeuvres reception and a performance of “The Diary of Anne Frank,” sponsored by PNC Bank, The Herbert Bearman Foundation and The Macht Philantropic Fund of The Associated: Jewish Federation of Baltimore.

In addition to the JT; The Associated, the Jewish Museum of Maryland, the Peggy and Yale Gordon Center for the Performing Arts, Baltimore Jewish Council, American Visionary Arts Museum, Baltimore Museum of Art and the Anne Frank Center for Mutual Respect all participated in “Baltimore’s Spring of Remembrance,” an effort to educate the community about genocide and remember the victims of the Holocaust.

As part of “Baltimore’s Spring of Remembrance,” the Chesapeake Shakespeare Company offered a virtual reality tour of “The Secret Annex,” a three-dimensional recreation of the space where Anne Frank and her family hid during the Holocaust. The headsets, donated by Oculus VR, will be donated to the Jewish Museum of Maryland, so they can permanently offer the virtual reality tours.

All photos by David Stuck