In some respects, Dec. 31 seemed a Monday like any other at Edmart Specialty Deli: glass jars of olives sitting neatly on shelves; salami hanging lazily off of hooks on the far side of the counter; customers enjoying their orders and each other’s company; and photos of the sitcom “I Love Lucy.” The decor could almost fool a person into thinking America was still in the heyday of the Eisenhower administration.

Upon closer inspection, however, some of the shelves were conspicuously lacking in foodstuffs, while a steady stream of well-wishers came through the door to give their regards and say their farewells to the deli’s owner, Baltimore resident Shelley Lev Wiseman. It was the last day of Edmart Specialty Deli’s 52 years in business.

Named as one of the country’s best delis by Duff Goldman of the Food Network’s “Best Thing I Ever Ate,” Edmart’s closure arguably marks the loss of a local institution, representing the latest in a string of delicatessen shutterings to hit Baltimore and beyond.

During the 1930s, New York City boasted as many as 1,500 Jewish delis, but that number has dwindled to 20, according to an article on the subject in the New York Times. Closer to home, Lenny’s Deli’s Lombard Street location — on the fabled “Corned Beef Row” — closed in 2017 and Courtney’s Bagel Cafe and Deli closed in 2019. Taken together with Edmart’s closing in December, the traditional deli may be past its prime.

It is a hypothesis with which Wiseman (68) agrees. The deli “had its time,” she said. “It’s in our hearts, the Jewish food, and it will never be forgotten.” She believes that the closings “are a phenomenon across the country” and attributes them primarily to the fast-food industry.

Edmart began as a partnership between two men, according to Wiseman: Ed Stern and Wiseman’s father, Marty Lev. Initially, the deli was located in Forest Park (“upscale Jewish Baltimore,” as Wiseman described it), within what had been a shomer Shabbos restaurant called Shuster’s.

When asked what the traditional appeal of Jewish delis was, Wiseman said that, “People love to eat the delicious Jewish food.” She noted: “It’s our heritage.”

Wiseman mentioned that the deli served a diverse clientele that got more diverse every year, attracting customers from both the Jewish and non-Jewish communities.

“It’s a nice diverse mix of humanity,” Wiseman said, noting that her customers, Jewish or otherwise, “love the deli.”

When asked what those customers were primarily buying, Wiseman mentioned two items in particular. First, there was Edmart’s kosher brisket, which she credited with getting her deli on The Food Network. In addition, there was the deli’s “renowned” and “top quality” chopped liver, which she described as “the holiday appetizer,” which people would come to the deli during the holidays for alone.

Some of the more notable customers that have visited Edmart over the years have been Oprah Winfrey and Ben Platt, who starred in the Tony award winning production “Dear Evan Hansen,” according to Wiseman.

Wiseman said the decision to close Edmart sprung from her desire to relocate closer to her loved ones. “I have a wonderful family in New Jersey, with three grandchildren,” she said, “and I’ve not seen them in 10 months.”

“A lot of people got verklempt when they were in here today,” Wiseman said about the community’s reaction to the closing, “And they were telling us [that the closing] was the end of an era.”

Edward Lott, 72, a 30-year customer of Edmart, agreed. “It’s a shame to see her leave, to see her close the business,” said Lott, who lives in Eldersburg. “She’ll be sorely missed.”

“My parents used to come here; my brother and sister used to shop here,” he said, recounting how they would purchase creamed herring and onions with which to break religious fasts. “It hurts me to see the deli closing after all these years,” said Devon Hamilton, 60, of Pikesville. Hamilton had worked at Edmart as a cook since 1996, ever since one of his cousins mentioned that Marty Lev had an opening available. “It’s very sad.”

Toward the end of the day, Wiseman noted that a potential buyer is interested in purchasing the store, but gave no further details on where negotiations stood. As to whether the store would continue to be a deli if purchased by a new owner, as the sun slowly set on both Edmart and the 2010s, she simply stated that “we just have to wait and see.”

Babies and Bagels returns, with COVID-19 protocols in place 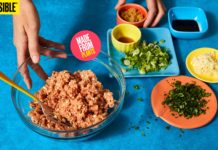