Mrs. P (unnamed for privacy) had been living in her home in Upper Park Heights for three decades, raising five children and experiencing her life in its rooms. But since she had gotten older, her house had fallen into disrepair and her insurance company threatened to take away her homeowners insurance due to the unsafe nature of the exterior of her home. Her plumbing was corroded and she had been without running water for four years, taking showers at the Jewish Community Center (JCC).

“Still, Mrs. P never lost faith,” reads a January 1999 article titled “Residing within Hope.” She said, “My father, who was a very religious, Chasidic man, always said, ‘Not to worry—my boss upstairs will take care of us.’ And his boss always did.”

The boss, the article tells readers, came in the form of Steve Berman, president of Mid-Atlantic Realty Management and on the board of directors for Comprehensive Housing Assistance Inc. (CHAI), an agency of The Associated: Jewish Federation of Baltimore that works in housing and community development.

Berman, who had seen several older people’s homes in disrepair in Upper Park Heights, was inspired to do something about the problem. Rallying fifteen of the employees at his Mid-Atlantic Realty office, Berman and his staff spent an entire day fixing Mrs. P’s home.

“It was neat because we were able to do something as a team, to drop our titles and work side-by-side and see her life change a little bit,” Berman said.

The team replaced the pipes, demolished a falling-down garage in the backyard, cleaned, painted and hung drywall.

“Now I have the luxury of gushing hot water!” Mrs. P was elated, waving her hands in excitement. Mrs. P said that these improvement were “one of the most significant things that was ever done for me in my life.” 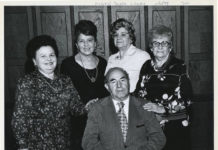