There have been times that teacher Joel Monroe has resorted to dropping a stack of books next to the desk of a sleeping student.

Monroe, chairman of the history department at Beth Tfiloh Dahan Community School, doesn’t do it because he’s a mean guy. It’s just that sometimes he has to resort to drastic measures to get students to wake up in class.

He finds the whole issue terribly frustrating, saying it seems kids are getting less sleep now than ever before.

Every school year, Monroe reminds his students that they need to get sufficient shut-eye.

“Kids simply do not get enough sleep, and their bodies are going to try to get that sleep somewhere. If it’s not at home, then the only other obvious place to do it is in the classroom,” he says.

It’s not just teachers who are concerned. Local pediatricians say lack of sleep — or trouble sleeping — is a major issue today.

As adults, we may drag our feet if we haven’t gotten a good night’s sleep. For kids, it’s different. Sinai Hospital developmental-behavioral pediatrician Dr. Sharon Richter sees a lot of overlapping issues. Some kids have trouble falling asleep, others are staying up too late doing homework or texting friends, and many children don’t have set bedtimes. Highly caffeinated beverages such as Red Bull or Mountain Dew make the situation worse.

Just 10 years ago, the big concern was kids having TVs in their rooms. Now, many kids have portable media devices.

“I think media of all kinds is a problem, and I think it’s harder to control because there are so many different ways to stare at a screen. And staring at a screen … is going to interfere with sleep to some extent,” says Owings Mills pediatrician Dr. Rona Stein.

Dr. Stein, of Valley Pediatrics, estimates that 30 to 40 percent of kids have sleep problems at some point in their lives.

The impact is huge.

Sleep-deprived teenagers may have more risk-taking behaviors. Sleepy youngsters can’t think as clearly and may have trouble concentrating. Lack of sleep impacts their problem-solving skills. It can make them moody and irritable. It can cause headaches or muscle aches.

Kids who haven’t had enough sleep “have a harder time concentrating, a harder time learning new material, a harder time being nice to their friends, so it can lead to social problems because they’re just irritable,” Dr. Stein points out.

Behaviors resulting from a lack of sleep can mimic the behaviors in kids who have Attention deficit hyperactivity disorder (ADHD), so if your child is having these symptoms, it’s important to work with your pediatrician to pinpoint the cause.

“I think it’s important for parents to realize that school-age children need about 10 to 11 hours of sleep, and adolescents still need at least eight-and-a-half to sometimes more than nine hours of sleep,” Dr. Richter says.

Kids who don’t exercise have many more sleep problems, notes Dr. Stein, who also says that kids who spend a lot of time staring at screens are many times the ones with the least get-up-and-go.

Plus, says Dr. Stein, kids who don’t get enough sleep are more likely to be overweight. This last tidbit is the one that tends to really get parents to sit up and take notice, she notes. “Being sleep deprived makes you to crave carbs.”

“It’s pervasive,” he says, saying he also sees many kids stuck in a morning “malaise.”

“They’re not themselves,” he says.

There’s a conflict here for parents and educators: Parents want their kids to take challenging classes, but should that come at the expense of a good night’s sleep?

Rabbi Field sometimes has to touch base with parents about their sleepy kids. Other times, parents will raise the issue with him. They’ll call and say their kids are staying up until 1 or 2 in the morning.

“Sometimes, it’s not because there’s so much homework but it’s time management,” he notes. Instead of staying up all night, the rabbi advises students to set an end time for their homework. “Whatever they finish, they finish, and what they don’t finish, we’ll deal with it the next day,” he says.

Also, says Monroe, for some kids, powering through on inadequate sleep has become a sort of misguided cultural badge of achievement.

“Somewhere along the line, sleep, which we biologically need, has been equated with sloth, and it’s absolutely ridiculous,” he says.

If your child is falling asleep on his own, is waking up relatively ready to start the day and is not falling asleep during the day, Dr. Stein says everything is probably fine. If he’s not, it’s worthwhile getting serious about good sleep hygiene, which includes keeping the room dark, a set bedtime and having media-free quiet time before bed (those same rules also apply to adults).

Whatever grade your kids are in, it’s a good idea to start easing them into an earlier bedtime a week or so before the start of school.

And never assume that it’s too late to get your teenager to change his or her ways.

“No pediatrician will ever tell you it’s too late to do anything,” says Dr. Richter. “I think the longer the problem [has existed], it may be harder to change, but it doesn’t mean you should give up.”

In the meantime, Monroe says he’s modified his teaching style to make his classes more interactive in hopes of keeping his students engaged and alert. Hopefully, it means he won’t have to resort to dropping any more books to wake up sleeping scholars. 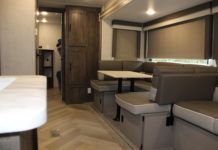