Why doesn’t Judaism follow the “regular” calendar? Jewish holidays end up being earlier or later, and it causes a great deal of inconvenience and confusion.

The English word “month” comes from “moon” because its duration was meant to reflect the rotation of the moon, which is approximately 29.5 days. The trouble is, though, that we cannot fit a whole amount of moon cycles into the 365-days-long cycle of the sun.

To avoid this discrepancy, the European calendar ignores the moon and makes each month 30 or 31 days. This allows 12 months to fit accurately into 365 days of the solar year. Some Middle Eastern cultures found a different way of dealing with the calendar dilemma. They ignore the solar cycle. Their year consists of 12 real months (of 29.5 days), but as a result, it is only 354 days long — 11 days shorter than the solar year.

The Jewish calendar, though, has to be based on both the sun and the moon. The Kabbalah explains that the sun is a metaphor for G-d, as it is our source of light, energy, and life. The sun is steady and consistent. The moon is allegorically compared to people, whose task is reflecting G-d’s light. Some days we do this job better than others. The lit part of the moon is sometimes bigger, sometimes smaller, and sometimes disappears altogether.

Figuring how to make ourselves align with G-dliness is difficult — but according to the Torah this is the whole purpose of our existence. Living immersed in spirituality and forgetting about the physical world is easy — a person who does it will not see any dilemmas in his or her life. Thinking only about the material is easy as well. Animals don’t have any inner conflicts because they don’t need to reckon with spiritual or moral considerations.

We, on the other hand, have the difficult task of combining the physical and the spiritual. We have to find a way of aligning the cycles of the moon with the sun. This is the Kabbalistic reason for creating a complex formula of the Jewish calendar — a 19-year cycle, collaborating the cycles of the sun and the moon.

This week’s Torah portion, Parshat Bo, tells us about the first mitzvah the Jewish nation received after leaving Egypt — the mitzvah of establishing the Jewish calendar. One might wonder why was a calendar assigned the prominent place of the very first commandment? As we see, this idea reflects the entire purpose of our existence in this world: making our physical world align with G-dliness.

Parshat Vayeshev: One person can make all the difference 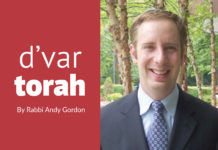