The Governor’s Commission on the Future of the Pikeville Armory released its Vision and Report on May 22, concluding:

“As an historically significant site and a unique community asset, Pikesville Armory should be held in the public trust and utilized for the benefit and use by all segments of Pikesville’s diverse community. It is envisioned that the Pikesville Armory will be a multi-use venue for recreation, arts, and other community programming, as well as opportunities for revenue-generating development, interests, activities and programs, thereby becoming a cornerstone for the sustainable economic stabilization and revitalization of Pikesville.”

This comports perfectly with what 1,000 Friends of Pikesville, Inc. has been proposing for three years; that many of the 90 garages in the back of the property, in a big “U” shape around a large open field, will be rented primarily for artists’ studios and galleries, and a few small compatible commercial uses, such as a deli, ice cream shop, a gift shop and similar uses.

The co-chairman of the Governor’s Commission, Sen. Bobby Zirkin (D-District 11), said at its last meeting that he thought the vision was a good one and committed that he would “advocate” for it. The studies of the economic impact of arts and entertainment districts around the country prove that they are economic engines that will help greatly in revitalizing, stabilizing and sustaining the Pikesville business district into the foreseeable future. In addition, the Greater Pikesville Recreation Council is the only one in Baltimore County without dedicated space for their programs. The large field and Armory building would provide such a space, along with space for other community and recreational uses.
The Pikesville Armory Alliance has been informally discussing next steps. Its members are the Greater Pikesville Recreation Council, with about 5,000 members; the 1,000 Friends of Pikesville, Inc, now with 1480 members; the Pikesville Owings Mills

Chamber of Commerce; and the NCO Club of veterans who still meet at the Armory. The Alliance is working on obtaining enough money to conduct three vital studies in the coming months: the feasibility of the Commission’s vision, its total costs and funding mechanisms to make it a reality.

The 1,000 Friends of Pikesville, Inc. had previously developed and proposed funding models that were successful for this kind of project around the country. But the organization acknowledges that additional funding plans need to be developed by professional experts on the subject, and that is one of the studies planned by the These plans were boosted substantially at the fourth annual meeting of 1,000 Friends of Pikesville on June 6 at the Pikesville Library. Baltimore County Councilman Izzy Patoka (D-District 2) spoke in support of these efforts; and the Baltimore County Executive Johnny Olszewski, Jr. spoke as well, saying that he “wants the county to be a partner in this project.” On May 17, Olszewski authored a letter of support for this project, which concluded:

“ I will do my part as County Executive to explore these partnerships that can fulfill needs in Pikesville, the Northwest Gateway, and all of our diverse community. As the recommendations are finalized, we look forward to working with you to explore paths for the Pikesville Armory to become a transformative site and an integral part to the corridor’s revitalization. We all join you in the hopes that, as your draft vision states, the Armory will be a “cornerstone for the economic revitalization and stabilization of Pikesville.”

Gov. Larry Hogan (R) toured the property in February 2018 and noted the large size of the property and the fact that the buildings are protected by historic preservation status. “I want to do with this property what the community wants done with it,” Hogan said.

Howard J. Needle and Melvin Mintz are respectively president and chairman of the board of 1,000 Friends of Pikesville, Inc. 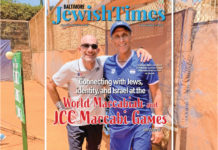