They are hiding in the darkness of midnight on Jerusalem’s streets. They are in the clubs, on the corners, smoking weed, drinking alcohol. Lost.

That is, until Rabbi Moshe Zeivald finds them and brings them to Kfar Zoharim in central Israel. The kfar (“village” in English) is just several miles from Washington, D.C.’s sister city of Beit Shemesh. Less than three years ago, this village was nothing but a dream for Rabbi Zeivald. A-year-and-a-half ago, it became a reality.

Rabbi Zeivald was working for the outreach organization P’eylim/Lev L’achim, helping to bring secular Jews back to a Torah lifestyle, when he discovered that in his own community, in the Haredi community, there were thousands of young men who themselves were struggling, were searching.

“The Haredi world is built on young men who learn in yeshiva,” Rabbi Zeivald explained. “If you are not in yeshiva, you are no one. There is nowhere for you to go. And this causes tension in the home. For the parents, all their hopes for [this child] are killed.”

Most Haredi families, he said, are embarrassed by a child who cannot learn. They cut him off. And when he is cut off from his family, he is cut off from this community; in shul, no one will let their children sit with him — he might be a bad influence.

“No yeshiva. No home. No community. You are on the streets,” said Rabbi Zeivald.

When the rabbi approached his supervisors, they said, “You are dreaming.” But Rabbi Zeivald believed, like Theodore Herzl, that if he willed it, it would become a reality. So he approached more rabbinic leaders. Finally Rabbi Yitzchok Dovid Grossman of the organization Migdal Ohr listened. He charged Rabbi Zeivald to prove to him that this problem was as acute as Rabbi Zeivald described. Overnight, Rabbi Zeivald recruited and brought a busload of young men — good kids who hadn’t smiled in months (some, years) — to Rabbi Grossman. These were boys from frum families who were now promiscuous and who were starving — both literally and for love.

“He didn’t believe me,” recalled Rabbi Zeivald, smiling to himself. “He interviewed each one of them.”

By the end of the day, Rabbi Grossman was committed to the idea of Kfar Zoharim. Just over one year later, the village was born.

“The parents sit shiva for these kids. We give them life,” said Rabbi Zeivald.

On a November afternoon, Kfar Zoharim is beautiful. A blue skyline tops the newly built cabins, a stable, a greenhouse, a wood shop and, of course, classrooms so the boys can study for their matriculation exams, go to the army, get into college and lead successful lives. If they return to a traditional Torah lifestyle, “Wow!” said Rabbi Zeivald, that’s icing on the cake. He is not out to put the boys back in yeshiva; his goal, he said, is to give the 80 boys who now live in Kfar Zoharim “a healthy alternative so they don’t end up again on the street. Most of all, it is about giving them love. Without love, you can’t [impact any kid].”

But it is not a free-for-all. The boys work hard. At Kfar Zoharim, the residents take command of their environment. If they want a walking path between their rooms and their classroom, they make it with their own hands, learning basic construction skills, how to lay concrete and position stones and tiles. They engage in charity work, trained by Jewish National Fund to build benches and picnic tables that are donated to JNF forests. They are offered music classes and science classes so they can discover what they are good at and share their talents with their peers and, ultimately, with the State of Israel.

While the boys are building their community, the counselors and other staff are rebuilding the boys. A staff psychologist is available 24/7, said Rabbi Zeivald; the boys cannot be alone with their own thoughts. Live-in “moms” and “dads” model a healthy family structure, and even the teachers are trained in differentiated instruction to ensure that no child is left behind.

At the same time, Rabbi Zeivald is in constant dialogue with the parents, working with them to accept their sons for who they are and coaching them to open their arms. Rabbi Zeivald said it may seem obvious that parents should unconditionally love and accept their sons, yet he does not blame the parents. He said their reaction is simply a result of societal pressure. He has seen some success on this front, too.

“You need a lot of strength to work with these boys,” he said.

Why do the boys agree to come? They are hungry. Rabbi Zeivald feeds them — literally. Then he offers them food for thought, the idea of a chance to reclaim their lives. And he is honest; he was there once, too. At 14, Rabbi Zeivald was on the street. He had to fight for himself, to reclaim his life. He wants to cushion the path for these children, all between the ages of 14 and 18.

Rabbi Asher Yechiel Castle is one of the campus mentors. Like Rabbi Zeivald, he too took a hard road to get where he is today. He said, “I was where they are. I understand. I met nice people along the way who knew I wasn’t a bad kid, that I had a future. I am that person for these kids.”

Teacher Haggai Avikar speaks similarly. He said he could be a teacher who comes, gives over his Israeli history lesson and leaves, but he doesn’t do that. He builds relationships with his students.

“God loves this place so much,” said Rabbi Zeivald. “These are His kids, too.”

How US laws against Israel boycotts could hit Ben & Jerry’s 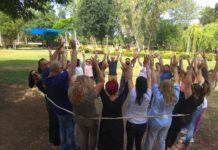