Larry Brenner prepared for the worst when Baltimore officials announced two years ago they would gradually raise the city’s minimum wage to $10.10 per hour by 2018.

For the last eight years, he has owned and operated Konstant’s, a stand in Lexington Market, and raises doubts about the ramfications additional increases could have on his business in the near term.

Brenner’s anxiety stems from an Aug. 15 Baltimore City Council vote that sent a bill that would raise the minimum wage to $15 by 2022 back to the council’s labor committee for modifications. Because his small business would be exempt, Brenner worries about the quality of workers he would attract. 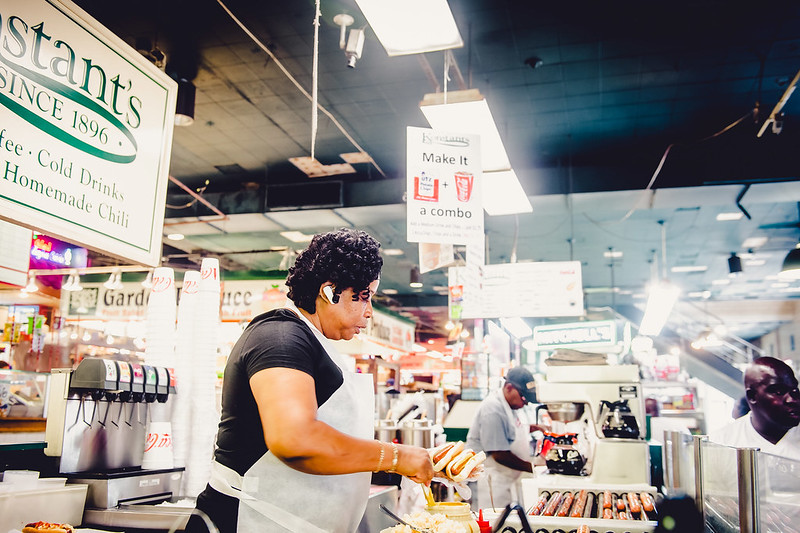 “If I’m trying to hire people and they can go to McDonald’s for $15 an hour and they can work for me for only about half of that, what people am I going to get? I’m not going to get very many people or many who are very good — one or the other,” Brenner said. “Us little guys, we now have to compete for labor.”

City business owners, politicians and minimum-wage workers alike have taken strong stances on both sides of the aisle.

Councilwoman Mary Pat Clarke (D-District 14), the bill’s chief sponsor, called for the measure to be pushed back to as early as December, when eight new members will join the council after the November election.

Rochelle “Rikki” Spector (D-District 5), the so-called dean of the council, expressed her reservations with how Clarke plans to carry out her proposal since she hasn’t been able to generate enough support.

“Everything that [Clarke] has done has been bogus, because she can’t get enough votes,” Spector said. “It won’t pass anymore next term than it would have this term,  because it’s not good for Baltimore. The only way it would make sense is if the two surrounding jurisdictions [Anne Arundel and Baltimore counties] passed it — Baltimore is the hole of the doughnut.”

There also is widespread disagreement on how potential wage hikes would be implemented, and many small-business owners like Brenner feel the measure would derail the economy in Baltimore.

Under the current proposed legislation, first introduced in April, businesses with fewer than 25 employees and those with less than $500,000 in gross annual income would be exempt.

The bill also calls for the minimum wage to rise to $9.50 from $8.75 next July, with $1 increases from that point on until getting to $13.50 in 2021. It would then increase to $15 in 2022 and would rise with the cost of living after that. Under the current proposal, a commission would determine cost-of-living adjustments.

Although Brenner said he falls into the exemption category — he employs 10 people but did not disclose his earnings — he acknowledged he pays his workers $3 to $4 an hour above minimum wage to get the best possible service. At his peak, Brenner said he employed as many as 15 people, but an uncertain economic climate has forced him to cut back in recent years.

The new council people, I hope and pray that they will be well educated on what’s going on. Where are we going to be more fiscally responsible for the people who live here and have this tremendous, tremendous financial burden?

Konstant’s, which sells candies, coffee, barbecue, fresh-roasted peanuts and hot dogs, has been busy enough to cover its overhead for now, Brenner said. But an increase in the minimum wage, he noted, would cause him to raise prices on all his items by a slight percentage to absorb a proportional wage bump for his employees.

The feeling among some economic experts is that niche businesses like Brenner’s can maintain, but larger national corporations may eliminate some positions to maximize profits.

Daraius Irani, chief economist of the Regional Economic Studies Institute at Towson University, said if wages become too high, it could lead to consumers ordering from self-service kisok screens as companies cut labor costs. It’s a measure that many fast-food restaurants have adopted across the country in the last year, allowing customers to order and pay without even having to interact with another person.

“If the city were to raise the minimum wage to $15 without the state raising its minimum wage to an appropriate level, I think it would put the city at a great competitive disadvantage,” Irani said. “What we’re already seeing is that many restaurants like McDonald’s are already replacing people with capital. At the end of the day, these kind of businesses will find a way to maximum their profits, and one way to do that may be to cut back on their number of employees.”

Other companies, meanwhile, have  already contemplated seeking greener pastures outside of Baltimore.

Jay Steinmetz, CEO of Baltimore-based Barcoding Inc., a technology company that specializes in radio frequency technology, said the proposal, if passed, would force him to consider leaving the city and may put many of his 90 employees out of work. One of his company’s main competitors, RMS Omega Technologies Group, moved its headquarters to South Carolina from Baltimore several years ago, he noted, for similar reasons.

In June, Steinmetz, who serves on Gov. Larry Hogan’s Regulatory Reform Commission, pleaded at a city council hearing for committee members to dismiss the bill altogether.

“Despite our size, it’s hard to make a profit, especially in Baltimore City,” Steinmetz said. “Some years, multiple years, I don’t take a paycheck. Regardless, we employ 45 people in Baltimore City alone. At least half the management team lives and works in Baltimore City. If you eliminate the low-paid positions, you corrupt my ecosystem. We risk collapse, [it’s] that simple. … The proposed increase in minimum wage will continue isolating Baltimore as a high-cost location with high taxes and high crime.”

Steinmetz said most of his employees are skilled workers who make more than $12 an hour. Depending on the time of year and demand, though, he said he hires several temporary workers for miscellaneous tasks, often paying them minimum wage.

Still, it remains uncertain just how many workers would be impacted.

According to a study published in May by David Cooper of the labor union-supported Economic Policy Institute, 98,000 workers, or 27.1 percent of Baltimore workers, would benefit from increased wages.

Irani, however, said a number of those workers could see their hours cut or jobs terminated.

“I would expect some businesses to limit the number of people they hire,” Irani said. “The Baltimore City Council needs to understand that it would now make the city the high-cost location in Maryland.”

Because many restaurant owners feel like relocation isn’t a realistic option, compensation for tipped workers has been at the center of their focus.

Germano Fabiani, owner of Germano’s Piattini in Little Italy, has mixed feelings regarding how tipped workers are being incorporated into the bill.

The bill would increase the tipped minimum wage for restaurant workers to $5 by 2020. State law currently sets the minimum wage for tipped workers at $3.63, with the understanding that their tips will cover or exceed the standard minimum level. If those workers’ wages do not reach state minimum wage, employers are required to make up the difference.

The original measure called for tipped workers to receive $15 per hour by July 2025, eliminating tipped wage requirements, but that was later amended. Fabiani was happy to see that change made for the 12 servers he employs, but he still raised concerns about possible alterations that could change between now and the next vote.

“To me, it made no sense that they wanted to get rid of tips, because my staff can make up to $100 more on a good night with tips,” Fabiani said. “So they would have seen that money coming out of their pockets, and it probably would have led left me short-staffed at some point.”

For organizations that employ workers with disabilities, such as nonprofit Chimes Inc., there is a fear that if government funding does not increase, they may have to cut the number of services offered in Baltimore.

“As an organization that serves the  undeserved — and oftentimes those lacking a voice — we fully support the intent of this law,” Levi Rabinowitz, Chimes’ spokesman, said. “But we do not believe the law will achieve its goal. And it may well put people at risk and actually harm some of the very people it seeks to help.”

Clarke said she hopes when the next council takes office, the younger, more progressive legislators will pass the bill.

“The new council people, I hope and pray that they will be well educated on what’s going on,” Spector said. “Where are we going to be more fiscally responsible for the people who live here and have this tremendous, tremendous financial burden?”