It’s the morning of your child’s big day. The caterers have started cooking, the venue has put up decorations, and family is starting to arrive.

But then the worst happens.

A heart attack. A blizzard. A new coronavirus. In the rare — and currently very relevant — emergency situation, party planners should be prepared.

Maryland Gov. Larry Hogan prohibited gatherings of more than 50 people, and the past few weeks have seen a flood of b’nai mitzvah cancellations.

“We’re in uncharted territory,” said Monroe Zeffert, owner of Celebrations Kosher Catering and Event Planning. “I was floored when a bar mitzvah for March 21 was canceled. I was dumbfounded.”

During bad weather, such as a snowstorm, families might cancel or change the logistics of their b’nai mitzvah because they don’t want people to drive in the dangerous conditions. But in those cases, unlike the current pandemic, people are usually able to give more notice, and it’s not on the same geographic scale.

Now, Zeffert said, his staff “is getting killed on this. People are counting on their paycheck, and part-timers count on this for their weekend. Those events are not happening, and so there is no pay for them.”

Grey Rock Mansion, one venue for bar and bat mitzvahs in Baltimore, has seen an increase of worried customers, but Manager Raina Gover urged people not to panic.

“Don’t freak out,” she said. “We have people calling for events in July, and some people call and say, ‘Oh my gosh, my caterer is canceling all events,’ but in actuality they just canceled food tasting.”

While the current situation is unprecedented, party planners have certainly seen other situations that have required them to switch gears on an upcoming bar or bat mitzvah.
Zeffert said that he is usually prepared for emergencies. For example, his company owns equipment for worst case scenarios.

“We’ve dealt with a truck breakdown, refrigeration issues,” he said. “We have seven full-sized trucks, so if the power goes out, we roll everything into another truck.” The company owns six propane ovens, which are for off-site venues, but can be used if their kitchen is not usable. They also keep backup tablecloths.

Several years ago, Zeffert recalled, he had a bar mitzvah at a synagogue that lost power, so on short notice he arranged for the venue to happen at a small school.

Grey Rock Mansion has a few venues with generators on-site in case of power outages, Gover said. They also have companies they will call in case they have to find a new location. In addition, they have equipment to make sure the lots are cleared and safe in case of storms, “but we have clauses in our contract for if there’s a state of emergency, that our clients can reschedule.”

For emergencies that happen at the actual party, My Jewish Learning advises that the host prepare an emergency kit to keep handy, including a sewing kit, extra makeup, first aid, hairbrushes, and clothes.

Zeffert said that usually it’s the family that cancels. “Normally it’s not the venue that’s the problem, usually it’s the host determining it’s too much of a risk to bring all the families together,” he said. “It’s the same if the bride messed up and the number of guests is higher. We do the best we can to make it happen. We do what we have to do.”

Zeffert does not charge customers for problems like this, which he said is standard in the industry. However, the more advance notice that a family is able to give, the more likely they are to successfully get refunds. “If they try to tell us two or three hours in advance, then they bought this party,” he said.

Zeffert advises readers to be in close communication with their caterers and venues to be sure cancel at the earliest notice and not lose money. Gover seconded this advice and said people should have a backup plan.

But even with late notifications, Zeffert tries his best to accommodate emergencies.
“We actually did change one venue for MATHCOUNTS,” he said. “We’ve been doing the middle school competition for 20 years, and the state finals have been at Johns Hopkins University. It’s supposed to be their final championship, a culmination of half-a-year’s work. They were told Tuesday night when Hopkins closed that they couldn’t use the Hopkins venue, so I arranged for Ten Oaks Ball.” He squeezed them into a tight spot Sunday morning in between weddings.

Zeffert advises clients to have emails and contacts for their guests on hand in case the location changes.

However, he stated, it is rare for last-minute problems like these to come up. The cancellations he has faced recently due to COVID-19 is a problem he has never seen in his 36 years of business, he said. He expected large organizations to cancel or postpone events, but he has never seen weddings and b’nai mitzvahs cancel on such a large scale.
“This is truly different, a real health pandemic,” Zeffert said. 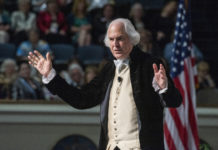