After the 10th plague, Pharaoh tells the people to “Get out of here!” They move so quickly that their bread doesn’t have time to rise. The entire community, young and old, begins the journey toward the Promised Land.

Yet, just days later, they hear rumbling. In the distance, chariots approach. It’s Pharaoh and the Egyptian army, coming to enslave them, to kill them. Here the Israelites stand; on one side the vast expanse of the Sea of Reeds, on the other side an army with spears and swords.

Moses tells the people, “Have no fear! Stand by, and witness the deliverance which the Eternal One will work for you today; for the Egyptians you see today, you will never see again.”

These were brave words, comforting words. But the people were still in shock. Their tormentors were here again. Even after the 10 plagues, even after the escape to the desert, they still didn’t feel free. Their bullies were still present, their confidence was at a low, and they were unable to rise up to the occasion. They’d rather give in and throw in the towel and head back to Egypt.

Even Moses, with his comforting words, feels stuck. God yells to Moses, “Why do you cry out to Me? Tell the Israelites to go forward!”

Our rabbis ask, what was Moses’ cry? What was he doing at that moment that God needed to step in and yell at him?

The rabbis answer that Moses was lingering over prayer. He was praying and praying and crying and bemoaning, yet he wasn’t acting.

Like Moses, it’s easier for us to bemoan and cry out. It’s easy to post on Twitter and Facebook. It’s much harder to pull ourselves up and act, to do our part to change our world.

It was God who awoke Moses. God who sounded the alarm. Moses grabbed his staff and held it over the sea, and a strong east wind turned the sea into dry ground.

No matter our politics, no matter our political views, we realize that our world has changed. This is a difficult and challenging time for everyone. Our day calls for a different course of leadership. We can’t sit back and bemoan and complain and cry out. Our country, our city, our community require real leadership, action that will lead to the betterment of all.

May we grab hands with one another, knowing that we’ve got each other’s back, and together may we step into the roaring unknown. May we act and make our world a better place for us all. 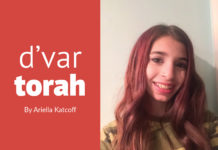