Fans of mainstream Jewish music may find Nissim Black’s latest single “Mothaland Bounce” jarring and alien, but they’re just not listening with an ear to the rhythm of Jewish history.

Set against the aural backdrop of an African basso profundo beat, and framed by scenes of gritty urban blight, the popular African-American-Israeli Hasidic artist boldly intones his rap-staccato credo in a manner that’s hard to square with his woolen tzitzit, long Polish bekishe and towering shtreimel.

“Mothaland Bounce” is definitely a bold departure for Black, who has made a name for himself in the Orthodox music scene with his deeply spiritual tracks like “Fly Away“(2017), “King of the World” (2019) and a glorious duet with Gad Elbaz (“Hashem Melech 2.0,” 2016). These popular songs, while borrowing from the hip-hop styling of his youth, seem safely kosher in comparison to his newest work. On first encounter, “Mothaland Bounce” sounds dangerously subversive, an angry cri de cour from the other, poverty-stricken side of the Crown Heights divide:

“My momma told me that I READ good
Been on my straight and narrow
but my history is THE ‘hood
Thank G-d today that WE could
Buy a box of Cheerios or Kix
I can even buy Trix
I’m no longer on WIC
EBT card ripped.”

The social media reaction from his fans in the Orthodox world is overwhelmingly positive. But here and there, a note of dissatisfaction — and disbelief — emerges.

One ellipses-filled comment on the original video left by Shmuel Simcha called the video “very conflicting … mixed signals … very in your face to white jews affirming he is not really comfortable with them … his skin is camouflage in the synagogue … yeah right … he is a major star in the Jewish world. no one begrudges his skin color … the “white” Jews are putting him in times square rapping at Jewish concerts. he seems very unsettled here, and dissatisfied. this is a highly unlikeable work, and very in your face to the Jewish community that has embraced him.”

Such objectors have it all wrong. Far from a departure, “Mothaland Bounce” may be Black’s most authentically Jewish work ever, part of a long tradition of cultural syncretism that goes back 2,500 years to the rivers of the first Babylonian exile, if not earlier.

Even the title is an expression of the quintessential Jewish experience. ”Bounce,” the young people tell me, is slang for “leave suddenly, escape,” and in some contexts, “expel” (think “bouncer” at the door of a nightclub).

Who knows more about “bouncing” from adoptive “mother lands” than the Jews? We’ve been bouncing for a very, very long time. On the upside, we’ve picked up a lot of valuable cultural influences along the way.

For example, when the Baghdadi Hebrew poet Dunash ibn Labrat arrived in Cordoba, Spain, in the 10th century, he brought with him a remarkable artistic innovation: By adding Arabic-style meter to Hebrew, he was able to craft a dramatic new style and inject staid, static Hebrew poetry with an unsettling new vibe.

Traditionalists, led by the aged Menachem ben Saruk, were scandalized by Dunash’s adaptation of foreign, goyishe meter, and riots broke out on the streets of Cordoba. (Ah, to live in a time when Jews literally came to blows over poetry!) It took several centuries for the dispute to resolve, but Jews voted with their tongues — Dunash ibn Labrat’s Arabic style was enthusiastically absorbed into the art of the greatest Sephardic poets, from ibn Gabirol to Yehuda Ha-Levi. We are still singing ibn Labrat’s ethereal, Arabic-inflected “D’ror Yikra” around our Shabbat tables a thousand years after his passing.

Nissim Black is simply the Dunash ibn Labrat of our age. Like his bold predecessors, he cross-fertilizes Jewish culture and revitalizes it, keeping it fresh and relevant for the new generation, regardless of what those old-timers who knew Egyptian servitude might think of the innovations.

“Mothaland Bounce” is not just an example, but a celebration of Jewish cultural syncretism. In the video, three groups of dancers collide on screen: Beskirted African warriors move with disciplined, synchronized power and grace, hearkening back to Nissim’s distant heritage. They nearly come to blows with exuberant yet threatening African-American street dancers, who were torn away from the majesty of their ancestral cultures by the brutalities of slavery, displacement and persecution, but retain the explosive creative energy of African-American spirit.

On the cusp of a violent encounter, the thesis and antithesis of the Black experience is mediated, surprisingly, by an incongruous group of African-American Hasidim, complete with white knee socks and furry headgear. After halting the impending street battle by physically inserting himself between the African and African-American combatants, a Hasid casually demonstrates the signature dance move of the song — a gentle, rhythmic sideways tug of the right elbow and simultaneous “bounce” from the knees — that brings all the dancers into dynamic harmony — and signals the possibility of peaceful coexistence among Africans, African-Americans and the Hasidim.

The plot of the music video is modeled on the formation of Black’s own complex identity as an African-American Hasid.

“What brought peace for me was Judaism,” he related in a recent interview with Emily Burack in Alma. “So the Hasidic guy, he comes to break up the two things, and he brings shalom. It was all very telling of who I was.” 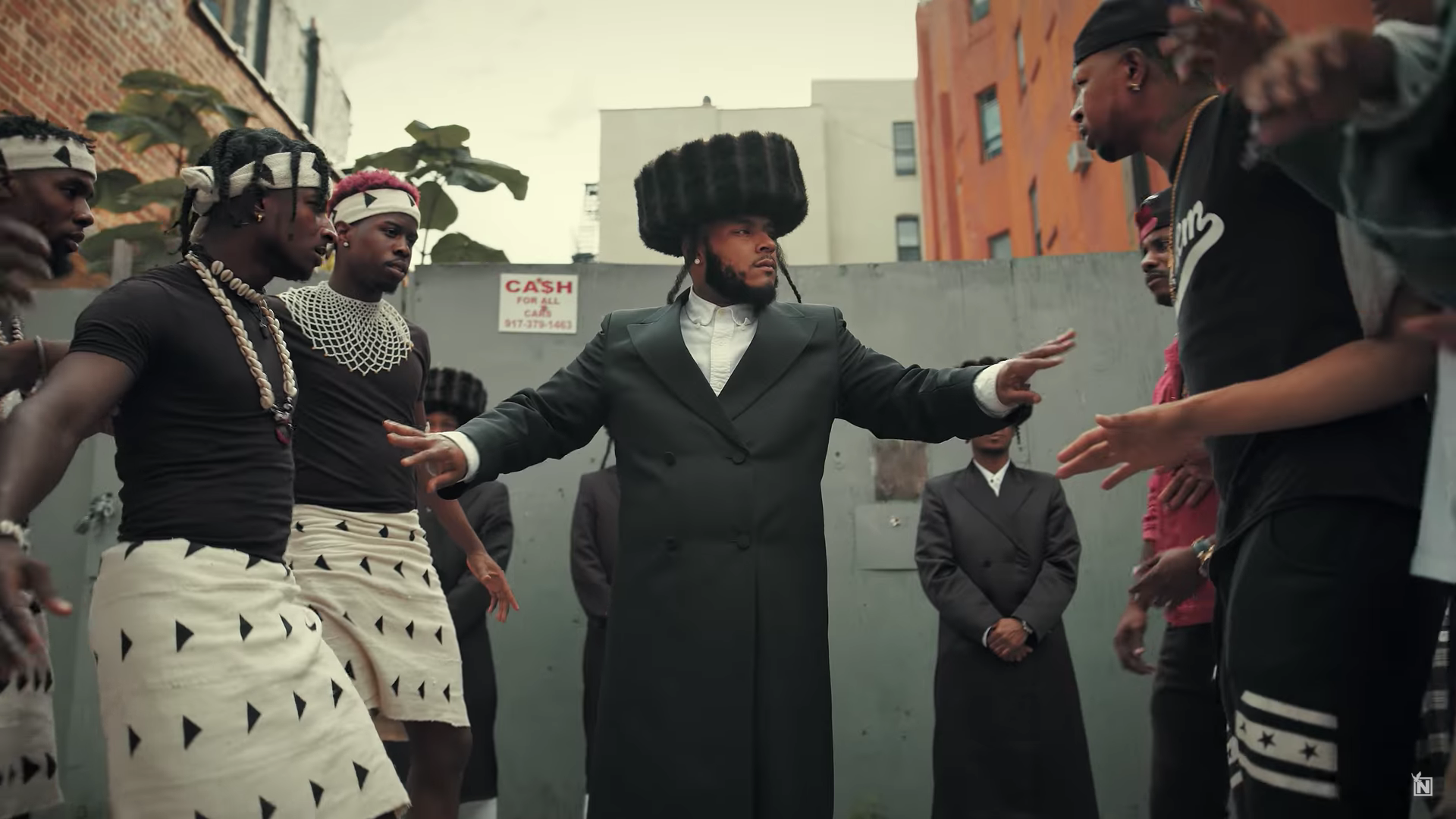 Black is certainly aware of racism in the Jewish world. His painful experience of institutional bias in Israel in 2018 prompted a visit to Rabbi Chaim Kanievsky, considered by many to be the most revered rabbi in the world. Rav Kanievsky took Black’s hand in his own and explained as white attendants anxiously crowded in to hear his faint, elderly voice: Black’s complexion was not a “hisaron,” or deficiency, Rabbi Kanievsky said. To the contrary, his African identity was actually his “maylah” — his great advantage.

With “Mothaland Bounce,” Black has transformed Rav Kanievsky’s statement into an imperative, acknowledging the liminality of his identity in the Hasidic world while refusing to submerge his ancestral heritage in a sea of Ashkenazim:

“In the synagogue
Camouflaged
But I can’t wipe the skin off
I’m proud of it
It’s loud a bit
But I’m not trying to criss-cross.”

Black affirms his Jewishness — and indeed, my Jewishness as well — by recognizing the diverse strands of history that make up the quilt of our personal identities. As he observed in an interview with Mordechai ben Avraham, Black compares his experience to that of Sephardim, who celebrate their Iberian roots even half a millennium after they were expelled from the peninsula. If they can be both Sephardic and Jewish — indeed, Sephardic, American and Jewish — then why would it be strange for Nissim Black to be African, African-American and Jewish as well? As he expressed it when asked about his adoption of traditional Hasidic clothing, “this is the way I hip-hop.”

“Mothaland Bounce” ends on a note of heroic belligerence, even defiance. Black is aware of the dangers associated with identifying as a Jew, yet for him there is no choice. Judaism “brings shalom,” he observed, despite what the haters might say:

“I just wanted you to be aware
Signing off as Mr. Black
Hitler’s worst nightmare.
Yeah.”

The surface reading of this powerful lyric, celebrating Black’s tripartite identity as African, American and Jewish, was highlighted by a German-language reviewer in the Weiner Zeitung (Hitlers schlimmster Alptraum, Feb. 18).

A deeper reading, however, suggests that the sleep of anti-Semites might be disturbed more by Black’s irrepressible joie de vivre, spiritual depth and undeniably Jewish creativity. Henry Abramson is a specialist in Jewish history and thought who currently serves as a dean of Touro College in Brooklyn, New York.