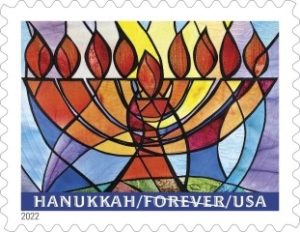 The stamp art features the design from an original wall-hanging.

The fiber art was hand-dyed, appliquéd and quilted to form an abstract image of a hanukkiah. Blue and purple represent the sky, while greens and browns represent the earth. The bright yellows and oranges represent the “Festival of Lights.”

At the bottom of the stamp, the words “Hanukkah, Forever and USA” appear in white capital letters.

The stamp will be sold in panes of 20. Forever stamps are equal in value to the current First-Class Mail 1-ounce price.

Chanukah begins this year at sundown on Sunday, Dec. 18.

One displayed a massive picture of Adolf Hitler.

“All in favor of banning Jews, raise your right hand,” read the billboard on the side of a truck dispatched by a political advocacy group called Accuracy in Media.

The group’s president, Adam Guillette, told J. The Jewish News of Northern California that the truck was part of a larger campaign to combat antisemitism on college campuses and meant to oppose the Berkeley Law student groups that recently announced they had adopted a bylaw pledging to bar Zionist speakers from campus.

“The amount of hatred, intolerance and antisemitism is morally outrageous, and it’s time for us to [non-violently] fight back,” he said.

Whatever the intended effect, the ploy frightened students and drew condemnation from the local branch of the ADL, Berkeley Hillel and the local Jewish Community Relations Council, and prompted offers of emotional support from the university. Some passersby threw rocks at the vehicle.

In reversal, Australia won’t recognize Jerusalem as Israel’s capital
Australia’s new left-leaning government is reversing the decision made four years ago under a conservative administration to move the country’s embassy in Israel to Jerusalem, reported JTA.

Then-Prime Minister Scott Morrison stated in December 2018 that Australia would recognize Jerusalem as Israel’s capital. The move put him in line with then-U.S.

President Donald Trump, who made a similar announcement a year earlier and had already opened an embassy in Jerusalem. But it made Morrison an outlier among the vast majority of world leaders, who have long held that whether Jerusalem is Israel’s capital should be negotiated as part of an Israeli-Palestinian peace accord.

In a statement, Australia’s Minister for Foreign Affairs Penny Wong explained that “Australia is committed to a two-state solution in which Israel and a future Palestinian state coexist, in peace and security, within internationally recognised borders. We will not support an approach that undermines this prospect.”