In addition to getting engaged to his girlfriend, Miriam, on Jan. 2, Estrin spoke at the United Nations in New York on Jan. 31, just days after his 28th birthday, as part of the UN’s annual Holocaust commemoration.

Two years ago, Estrin founded Together We Remember, an annual international campaign that works to end identity-based violence and genocide, and currently serves as its CEO. At the UN, Estrin outlined the group’s accomplishments, which include facilitating vigils in 42 communities across eight nations in April 2018.

Estrin grew up in Boca Raton, Florida, and attended Duke University in Durham, North Carolina, before working in San Francisco as a business strategy consultant in corporate philanthropy. When Miriam was accepted to study at the Johns Hopkins Bloomberg School of Public Health, Estrin used the move to Baltimore as an opportunity to make Together We Remember his full-time job.

In 2019, the Baltimore vigil will be held the Lloyd Street Synagogue on April 14.

How did you start Together We Remember?

All four of my grandparents survived the Holocaust, and in profoundly different ways. On my dad’s side, my grandparents were Jewish resistance fighters and they fought for three years in Lithuania. On my mom’s side, my grandma was saved by Raoul Wallenberg, the Swedish diplomat that saved almost 100,000 Jews in the Budapest ghetto. Then my grandpa survived both the Auschwitz and Mauthausen concentration camps. It was when my grandpa brought me to Mauthausen after my bar mitzvah that I woke up as a socially conscious Jew, and wanted to pursue social justice work.

When my grandfather died, I was a junior at Duke, and decided to do something on campus to honor his memory and address some of the issues on campus. There was tension between the Jewish and Muslim communities as the result of another instance of fighting and war between Israelis and Palestinians. We organized an inclusive vigil as part of Yom Hashoah that commemorated different genocides from history in addition to the Holocaust.

That’s what sparked the idea for Together We Remember globally. The idea that we can organize these kinds of vigils that transform remembrance into action in a very inclusive way and appeal to young people.

The day-to-day changes all the time. We’re effectively running a startup organization. We have just about all the same challenges you would have with starting a for-profit organization, except in this case people don’t like when you ask for money. It takes a lot of effort to show the results of your work and to build your relationships and convince them that it would make a lot of sense to invest in this project to improve the lives of people in this community and others around the world.

What are your big-picture goals?

We see our organization as an emerging movement that will make genocides and mass atrocities and other forms of identity-based violence no longer be the norm. Our specific goal is by 2048, the 100-year anniversary of the UN genocide convention and the UN Declaration of Human Rights, that we would achieve that goal. That gives us 30 years, and I think the timeline is important. We recognize that in one day, one campaign, one year, we’re not going to solve such a deep and complex series of issues, but if we give ourselves the horizon of multiple generations to work on this issue, then it changes the way we make decisions and work to make progress.

How has having four survivor grandparents impacted you?

My grandfather told me, as we left the Mauthausen concentration camp for the first time, that there’s always a way. Whenever you find yourself in a difficult situation, don’t rush to make a decision, just take a breath and consider what you’re options are. That informs the work I do. 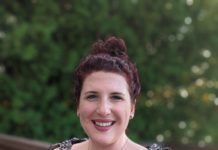