A teacher affiliated with Bnos Yisroel of Baltimore has been fired after being charged with the possession and distribution of child pornography. On Nov. 9, the school issued an alert to parents informing them that Zev Steen’s employment was terminated and that an investigation is ongoing.

He has been arrested and is currently being held without bond.

During an investigation of peer-to-peer file sharing networks commonly used by pedophiles to share illicit materials, police identified an IP address in connection with a torrent file that was found to contain child pornography. The address was later affiliated with Steen, confirming that he had possessed files containing child pornography on his computer.

Prior to his termination, Steen had been teaching a STEM pilot program aimed at 12th-grade girls at Bnos Yisroel since September of 2017.

He is also heavily involved in the STEM industry, with his LinkedIn profile listing him as the CEO of cybersecurity company MirageID, and the founder and CEO of SequelTracker, an in-development publicity tool aimed at authors. He was a director at the Baltimore-based Technology Awareness Group (TAG), but the organization announced his termination on Nov. 8, though they did not cite any particular reason for it.

Faculty at Bnos Yisroel are working to provide support for the eighth- through 12th-grade students at school who may have been affected or in a class taught by Steen. They also held a Zoom meeting for parents on Nov. 10 to address concerns with the help of Project Chai associate director and veteran traumatologist Zahava Farbman, LMSW.

Police detectives advise that anyone with more information should call Sergeant William A. Currie, BPD at 443-938-0466. 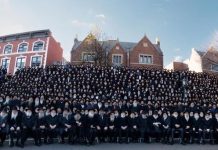