On a bright and chilly Sunday afternoon, members of Suburban Orthodox Congregation Toras Chaim gathered together for the groundbreaking ceremony of what would become their new synagogue building.

“The building of a shul is considered the highest priority in Jewish life,” said Rabbi Aharon Feldman, rosh yeshiva of Yeshivas Ner Yisroel, addressing the assembly in a white tent just a stone’s throw away from the construction site.

“The purpose of creation is that mankind should recognize that there is as a creator. That’s the reason why Hashem created the world. And when people get together to build a shul, and, in that shul, address the creator and speak to him and raise their voices in his praise, that is an accomplishment of the goal of creation.”

Selma Woolf, a member of the shul’s board of directors, gave an abbreviated retelling of the synagogue’s history, from its origins in 1959 to the present day, and the effect the shul had on the local neighborhood. When the synagogue was first being established, Woolf’s family had just put a $2,000 down payment on a $22,000 mortgage, but they managed to help give.

As the years rolled on, the congregation became more Orthodox in its practices, Woolf said. Then, when Rabbi Shmuel Silber and Rebbetzin Aviva Silber took the reins, it began to see a new flurry of activity and “word quickly spread about our gifted and spiritual rabbi,” Woolf said. The neighborhood’s typical ranch houses and two-story cottages gave way to two- and three-story houses.

“We know why people were paying incredible prices to buy homes near our shul,” Woolf said. “Our shul and our rabbi had become a magnet, and my $22,000 home could now command $400,000 and be sold within a week.

“So Rabbi Silber, thank you for enriching our lives,” said Woolf, with the crowd erupting in laughter.

Then, Woolf addressed the purpose of the gathering and the need for a new structure to house the congregation.

The existing “building, bursting at the seams, was aging badly,” Woolf said. “The pandemic had emptied its upholstered seats. The air conditioning failed at the onset of summer. The heating quit as the winters came. We won’t speak about the condition of our toilets.”

“I want to begin by saying our bathrooms are not that bad,” quipped Silber as he came to the podium, before adding that actual construction of the new building would begin in a couple of weeks. Silber also thanked the synagogue for the gift they presented him as he took to the stage: a painting of two dancing Chasidim he had seen and appreciated while traveling in Israel, and which the shul had managed to track down and acquired for him as a show of its appreciation.

After also thanking those who had gone above and beyond to contribute to the new structure, Silber emphasized that when the new building is completed, it would not be an ending but a new beginning.

“It’s a means to propel ourselves higher and higher,” Silber said. “When we build this bais, when we build our home, it is a platform. It is a launching pad for even more dynamic activity.

“You know, the most common question I’ve gotten asked over the weekend, and even this morning, was when are we going to be finished?” Silber continued. “And dear friends, there’s one answer. When are we going to be finished? We’re never finished. We’re never finished. The next stage is to build a building. But the building is not the end. The building is the beginning.” 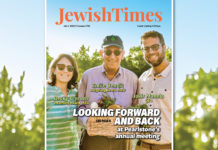