Imagine munching on some tasty tacos in L.A. on Monday, then chowing down on some Cantonese in Las Vegas on Wednesday. That’s what the Tripping Kosher team gets to do as they document some of the best kosher restaurants across the country with their web series.

“It was always meant to be this. Just quality food and television that just happens to be kosher,” said CW Silverberg, the bubbling personality and host of the internet show.

He is joined by his silent smiley sidekick Judd Joffre and cameraman/producer Tsvika Tal, and the three have racked up thousands of miles in their car filming the series together.

While Silverberg currently resides in the Baltimore area, he spent his childhood in a small Orthodox Jewish community in Minnesota. His upbringing in this environment was one of the driving forces behind Tripping Kosher.

“I’ve always wanted to tell these stories,” he said. “I didn’t grow up on the East Coast where kosher access wasn’t something to even consider. If you’re in New York and you want kosher pizza, you have a million options. But if you’re in Minnesota, you have one option, maybe.”

Amid the zany editing and occasional pop culture reference, the show provides its audience with interesting information about the eateries they visit. Unlike your typical influencer or food blogger, the crew had immersed themselves in the industry, with Silverberg having spent 10 years as a kosher product seller himself.

Before they even hit the road, they rolled out a map and pinpointed all the Jewish communities in the country and parts of Canada that had more than three kosher outlets. In almost five years, they had visited all the places on the map.

“When the doors opened up, we hit the ground running. And when we do run, we run hard,” Silverberg said.

It wasn’t an easy task. The group spent an average of 20 days a month traveling and only returned home for major holidays. They also financed the entire series out of pocket.

Following that philosophy, the crew puts a big emphasis on not only treating their craft with respect, but also the restaurants they visit. That’s why they pay at every spot they visit.

“The goal wasn’t to make a billion dollars in a couple of years. The goal was always to create a product that could exist forever and that is viewed as something done with respect of the world,” Silverberg said.

Also part of their rules, Tripping Kosher puts an emphasis of positivity in their videos. The content isn’t based around reviews, but around their love of the versatility of kosher across the states. Silverberg said that while the internet can be a place full of negativity and inauthenticity, their platform is far from that.

“We try to avoid all that by being secure in ourselves and knowing that we’re doing this with the utmost responsibility and care to the consumer, to the audience, to the food and to the business,” he said.

Despite all the hours and miles the crew has already put in for Tripping Kosher, they’re still just getting started. The more than 400 videos currently on their Facebook page and YouTube channel are the tip of the iceberg. Silverberg said there’s plenty of footage that their audience hasn’t seen yet including several kosher documentaries. In the end, they just want to show that kosher is more than just the food.

“It’s not an ingredient or a recipe,” Silverberg said. “It’s a lifestyle.” 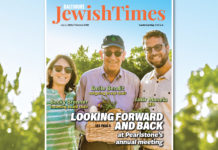